A Maya Universe in Stone (Hardcover) 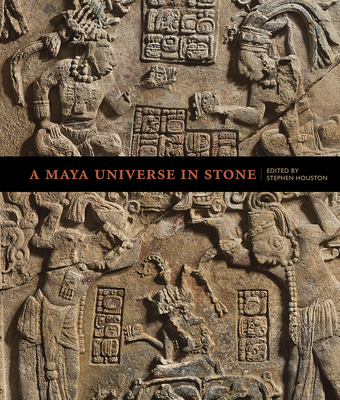 A Maya Universe in Stone (Hardcover)


Coming Soon - Available for Pre-Order Now
The first study devoted to a single sculptor in ancient America, as understood through four unprovenanced masterworks traced to a small sector of Guatemala.

In 1950, Dana Lamb, an explorer of some notoriety, stumbled on a Maya ruin in the tropical forests of northern Guatemala. Lamb failed to record the location of the site he called Laxtunich, turning his find into the mystery at the center of this book. The lintels he discovered there, long since looted, are probably of a set with two others that are among the masterworks of Maya sculpture from the Classic period. Using fieldwork, physical evidence, and Lamb’s expedition notes, the authors identify a small area with archaeological sites where the carvings were likely produced.

Remarkably, the vividly colored lintels, replete with dynastic and cosmic information, can be assigned to a carver, Mayuy, who sculpted his name on two of them. To an extent nearly unique in ancient America, Mayuy can be studied over time as his style developed and his artistic ambition grew. An in-depth analysis of Laxtunich Lintel 1 examines how Mayuy grafted celestial, seasonal, and divine identities onto a local magnate and his overlord from the kingdom of Yaxchilan, Mexico. This volume contextualizes the lintels and points the way to their reprovenancing and, as an ultimate aim, repatriation to Guatemala.
Stephen Houston is Dupee Family Professor of Social Sciences at Brown University.

“A multifaceted and illuminating account of an enigmatic group of looted monuments, this text offers a unique portrait of an eighth-century Maya sculptor and his world. In addition to considering the artistic, political, and cosmological spheres into which the works intervened, it does not shy away from modern realities of looting and the art market, laying out a persuasive case for the origin of these sculptures that will aid in their eventual repatriation.”
—Claudia Brittenham, Associate Professor of Art History, University of Chicago

“Cultural restitution—in the form of provenancing “orphaned” ancient monuments—is one of the most important endeavors in contemporary archaeology, art history, and epigraphy. In this book a group of leading scholars combine their considerable expertise to show how the meaning and context of a superb work of purloined art can be illuminated and restored.”
—Simon Martin, Penn Museum and the University of Pennsylvania

“Houston and his coauthors have written a unique and compelling study of a Classic Maya sculptor, Mayuy. They combine formal, iconographic, epigraphic, and contextual evidence to produce a biography of sorts from four magnificent lintel sculptures done over an extended time period, highlighting the important emergence of self-identification by Maya artists.”

“A timely and important story.”