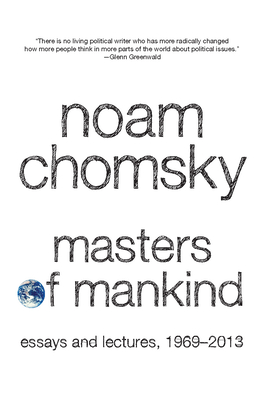 In this collection of essays from 1969 to 2013, many in book form for the first time, Noam Chomsky examines the nature of state power, from the ideologies driving the Cold War to the War on Terror, and reintroduces the moral and legal questions that all too often go unheeded. With unrelenting logic, he holds the arguments of empire up to critical examination and shatters the myths of those who protect the power and privilege of the few against the interests and needs of the many. An introduction by Marcus Raskin contextualizes Chomsky's place among some of the most influential thinkers of modern history.

Noam Chomsky is Institute Professor in the department of linguistics and philosophy at MIT. His work is widely credited with having revolutionized the field of modern linguistics. He is the author of numerous best-selling political works, which have been translated into scores of countries worldwide. His most recent books include the New York Times bestseller Hegemony or Survival, Failed States, Power Systems, Occupy, and Hopes and Prospects.Marcus Raskin, co-founder of the Institute for Policy Studies and professor of public policy at George Washington University, is a social critic, activist, and philosopher.