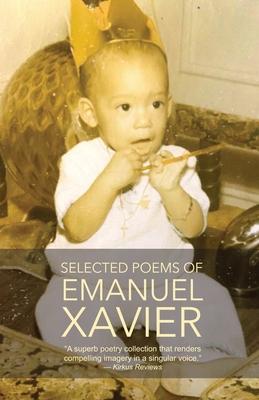 For the first time ever, a selected poetry collection from Emanuel Xavier, renowned LGBTQ poet and one of the Latinx community's treasures.

When he first emerged as a Nuyorican Poets Caf slam poet in the 1990s, Emanuel Xavier quickly took his place as one of the first openly queer, celebrated, controversial and significant poets of the era. Now, decades later, as a former homeless teen and a hate crime survivor, Xavier still stands as one of America's most inspiring and powerful voices.

"Gay Nuyorican life is limned and exalted in these scintillating poems. Xavier, a fixture at Nuyorican Poets Cafe slams in Manhattan and a star of HBO's Russell Simmons Presents Def Poetry, gathers 28 poems that infuse searing social and political commentary into achingly personal reflections. Many paint a panorama of New York that is bustling and vibrant: 'Ricans and Dominicans drive around / with black-faced virgins and saints on their dashboards / blasting rap and freestyle / down the streets.' The poet's collection conveys his struggle as a gay man in an often homophobic culture in tones that range from the bruised confessional in 'Deliverance' ('Wiping / myself / staring at the blood / shit / scum / from the last trick / that once again / left me bruised / deep inside') to the prophetic voice of 'If Jesus Were Gay.' ('If the crown of thorns were placed on his head / to mock him as the / 'Queen of the Jews' / If he was whipped because fags are considered / sadomasochistic sodomites, / If he was crucified for the brotherhood of man / would you still repent?') There's a lot of pain from separation and repudiation in Xavier's verse-from his biological father's abandonment of the family, his mother's rejection of his gay sexuality, and America's disdain for Latino immigrants. The volume is thus full of poetic portraits of outsiders and castoffs that can take strange and hallucinatory forms, as in 'Bushwick Bohemia, ' where a slacker is 'lying shirtless on the couch blunted out of his mind / staring at the roach on the ceiling / one single roach in a vast desert / or maybe an alien exploring a new world'-a grungy, Kafkaesque yet somehow hopeful and even liberating tableau of arrival and persistence. And the poet's life generates bleak, bracing wisdom in 'Beside Myself': 'You are not going to be remembered. / The best thing you ever did was keep a cat / alive for over sixteen years. / All you have is that rent-stabilized apartment / with the cracked paint and broken windows.' Xavier's many fans (and newbies as well) will be entranced by his evocative language, subtle rhythms, and fearless gaze." -Kirkus Reviews (starred review)