They Poured Fire on Us From the Sky: The True Story of Three Lost Boys from Sudan (Paperback) 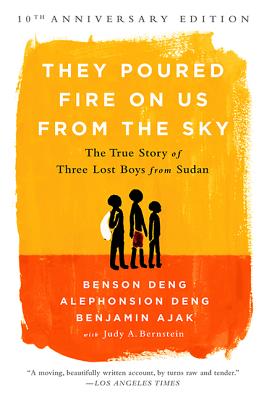 They Poured Fire on Us From the Sky: The True Story of Three Lost Boys from Sudan (Paperback)


We can usually get this book in 3 to 7 days, except during a pandemic. We are doing our best
The inspiring story of three young Sudanese boys who were driven from their homes by civil war and began an epic odyssey of survival, facing life-threatening perils, ultimately finding their way to a new life in America.

Between 1987 and 1989, Alepho, Benjamin, and Benson, like tens of thousands of young boys, took flight from the massacres of Sudan's civil war. They became known as the Lost Boys. With little more than the clothes on their backs, sometimes not even that, they streamed out over Sudan in search of refuge. Their journey led them first to Ethiopia and then, driven back into Sudan, toward Kenya. They walked nearly one thousand miles, sustained only by the sheer will to live.

They Poured Fire on Us from the Sky is the three boys' account of that unimaginable journey. With the candor and the purity of their child's-eye-vision, Alephonsian, Benjamin, and Benson recall by turns: how they endured the hunger and strength-sapping illnesses-dysentery, malaria, and yellow fever; how they dodged the life-threatening predators-lions, snakes, crocodiles and soldiers alike-that dogged their footsteps; and how they grappled with a war that threatened continually to overwhelm them. Their story is a lyrical, captivating, timeless portrait of a childhood hurled into wartime and how they had the good fortune and belief in themselves to survive.

Alephonsion and Benson Deng and their cousin Benjamin Ajak left the Sudan in 1987, and were relocated in 2001 from the Kakuma refugee camp in Kenya to the United States as part of an international refugee relief program. Today, Alephonsian Deng attends San Diego City College and works in the Medical Records Department at Kaiser Permanente Hospital. He has spoken to many schools, universities, clubs and organizations about his extraordinary story in Africa and adapting to his life here in America. Benson Deng runs the computer and digital photography system at Waste Management in El Cajon, CA. Benjamin Ajak resides in San Diego and speaks full time to organizations and schools, sharing his amazing life and insights into surviving as a child of war and a newcomer to the U.S. Judy Bernstein is a mother, writer, Student Advisor for the Community Economic Development Department at San Diego State University, volunteer mentor and Chair of the Advisory Committee of the San Diego International Rescue Committee and co-founder of the IRC Lost Boys Education Fund. She speaks with her co-authors to community groups, temples, churches, and schools.

“Their words speak for those who no longer have a voice. Their story will take the reader on a trip not soon forgotten of spirits unwilling to be broken.”—San Antonio Express-News

“Their serious tone, broken by the occasional wry smile, memorializes their parents, the land and animals that wove the tapestry of their early childhoods… One reviewer called the book ‘deceptively understated,' But the soft plainness of the young writers' voices, combined with their moral insight, throws the surreal danger and strife into sharp relief.”—San Diego Union-Tribune

“[They Poured Fire] is an amazing account of boys who managed to survive a terrifying ordeal… there's a kind of haunting beauty to their story… After reading this book, readers may feel like they've been on an adventure—or in hell, depending on your point of view. Whatever the case, this book is an eye-opener.”—Rocky Mountain News

“[The authors'] accounts, written first in lesson books and then on computer have been skillfully put together in a narrative, each boy carrying both history and that of their joint flight and reunion forward. The result is both fascinating and immediate, not least because of the guilelessness of the language and the particularly African use of metaphor and imagery….They Poured Fire…conjures up a world of marabou storks, acacia trees, termite mounds taller than men, scorpions and snakes that move in the dark, a world governed by traditions, rituals, seasons, weather, and obligations.”—New York Review of Books

“[T]ender and lyrical…one of the most riveting stories ever told of African childhoods—and a stirring tale of courage….Anyone interested in Africa, its children or the human will to survive should read this book. This beautifully told volume…will remain on my desk for years to come.”—Washington Post

“[L]ovely and unusual….[V]ital stories…that can help readers understand events in Sudan on a human level. But They Poured Fire on Us From the Sky is no mere historical document; it is a wise and sophisticated examination of the arbitrary cruelties and joys of being alive.”—Star Tribune

“[T]he book is at once an important addition to the contemporary dialog on world affairs and a surprisingly lyrical account of coming of age under adverse conditions… These folkloric memories—replete with lions and circumcision rituals—describe a world centuries removed from the high-tech industrialization of Western society. But they years of war also have bestowed wisdom, and simple observations of childhood are seen now through different eyes…” —Minneapolis Star-Tribune

“[The book] represent[s] genuine, heartfelt examples of what war does to young people and how they may adjust to life outside the country of their birth, especially the social and intellectual problems they experience.”—Deseret Morning News

“In a harrowing account of the war, three young refugees in California… remember how they were driven from their homes in Southern Sudan in the ethnic and religious conflicts that have left two million dead. They tell their stories quietly with the help of their mentor, coauthor Judy Bernstein, in clear, interwoven, narratives that put a personal face on statistics.”—Booklist