Habeas Data: Privacy vs. the Rise of Surveillance Tech (Hardcover) 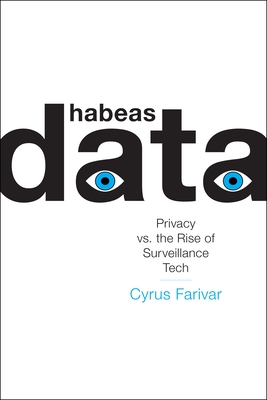 Habeas Data: Privacy vs. the Rise of Surveillance Tech (Hardcover)


This book has been declared out of stock indefinitely, so we are unlikely to be able to get it.
A book about what the Cambridge Analytica scandal shows: That surveillance and data privacy is every citizens’ concern

An important look at how 50 years of American privacy law is inadequate for the today's surveillance technology, from acclaimed Ars Technica senior business editor Cyrus Farivar.

Until the 21st century, most of our activities were private by default, public only through effort; today anything that touches digital space has the potential (and likelihood) to remain somewhere online forever. That means all of the technologies that have made our lives easier, faster, better, and/or more efficient have also simultaneously made it easier to keep an eye on our activities. Or, as we recently learned from reports about Cambridge Analytica, our data might be turned into a propaganda machine against us.

In 10 crucial legal cases, Habeas Data explores the tools of surveillance that exist today, how they work, and what the implications are for the future of privacy.
CYRUS FARIVAR is an investigative tech reporter at NBC News and the author of The Internet of Elsewhere. He is also a radio producer and has reported for the Canadian Broadcasting Corporation, National Public Radio, Public Radio International, The Economist, Wired, The New York Times, and others. He lives in Oakland, California.
"A great book. Cyrus Farivar shows that the government, at all levels, needs to more forthright about what kind of surveillance is used on all of us. The law desperately needs to catch up." — Rep. Ted Lieu, U.S. Representative for California's 33rd congressional district


"Habeas Data should be required reading for all public officials who want to better understand the near-future of privacy and surveillance." — Libby Schaaf, Mayor of Oakland, CA

“Cyrus Farivar pulls back the curtain on how the government has transformed everyday technologies into surveillance machines, and public and private places into surveillance traps—part deep-dive into how everything from your smartphone to your home can be used as a surveillance tool, and part crash-course in the court cases that both help and fail to constrain the government's most privacy-invasive activities. Should be at the top of everyone's must-read list.” — Robyn Greene, policy counsel, The Open Technology Institute at New America

“A  powerful book that looks at how two invisible forces—law and technology—combine to change the world we live in and the future that is available to us.” — Matt Mitchell, founder CryptoHarlem


"Cyrus Farivar has covered the excitement and tensions of big data collection for years. He his perfectly positioned, with this new book, to chart the history that brought us here and suss out where we're going next." — Emily Bazelon, author of Sticks and Stones & co-host of Slate’s Political Gabfest

"A lively catalog of privacy-related court cases and laws that have arisen alongside new technologies."— Sue Halpern, The New York Review of Books