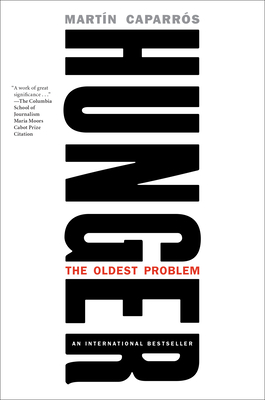 By Martin Caparros
$32.00
We can usually get this book in 3 to 5 days, except during a pandemic. We are doing our best

"Nothing less than astonishing..."—Booklist (starred review)

From a renowned international journalist comes a galvanizing international bestseller about mankind's oldest, most persistent, and most brutal problem—world hunger.

There are now over 800 million starving people in the world. An average of 25,000 men and women, and in particular children, perish from hunger every day. Yet we produce enough food to feed the entire human population one-and-a-half times over.
So why is it that world hunger remains such a deadly problem?

In this crucial and inspiring work, award-winning author Martín Caparrós travels the globe in search of an answer. His investigation brings him to Africa and the Indian subcontinent where he witnesses starvation first-hand; to Chicago where he documents the greed of corporate food distributors; and to Buenos Aires where he accompanies trash scavengers in search of something to eat.

An international bestseller when it first appeared, this first-ever English language edition has been updated by Caparrós to consider whether conditions that have improved or worsened since the book's European publication.

With its deep reflections and courageous journalism, Caparrós has created a powerful and empathic work that remains committed to ending humankind's longest ongoing crisis.

Martín Caparrós is one of the Spanish-speaking world's most preeminent and influential writers. The author of fifteen award-winning books, including works of fiction and journalism, he is currently A. D. White Professor-at-Large at Cornell University. He also writes a regular column for the Spanish edition of The New York Times. He currently lives in New York and Madrid.

Katherine Silver is an award-winning literary translator. Her most recent and forthcoming publications include works by María Sonia Cristoff, César Aira, Julio Cortázar, Juan Carlos Onetti, and Julio Ramón Ribeyro. She is the former director of the Banff International Literary Translation Centre (BILTC), and the author of Echo Under Story (What Books Press 2019).

"Nothing less than astonishing...It is nearly impossible to believe that a book on slow mass starvation could be in any way inspirational and yet that is what Hunger miraculously manages to do. A chronicle of righteous testimony and rage that must be read."—Booklist (starred review)

"A broad-ranging, provocative examination of a problem that is likely only to grow."—Kirkus

"Stark and moving...Caparrós offers an effective polemic on the horrors of hunger..."—Publishers Weekly

“A work of great significance that was the result of a multi-year odyssey among the richest and best-fed peoples on Earth, and among its poorest and hungriest, in an effort to understand how and why hunger persists in today's world.” —The Columbia School of Journalism’s Maria Moors Cabot Prize Citation

"Martín Caparrós Hunger is more than wise . . . His writing brings us into an inferno of reality that most of us give only, at best, our distracted attention. —Roberto Saviano, author of Gomorrah

"The most important writer of narrative journalism: our Capote, our Kapuscinski." —La Nacíon

"An impressive testimony, and an indictment." —La Temps

"Important reading, because it gives the stricken a voice, and reveals a horrible global 'normal' as a scandal." —Frankfurter Allgemeine Zeitung