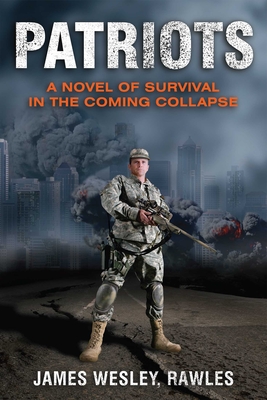 As hordes of refugees and looters pour out of the cities, a small group of friends living in the Midwest desperately tries to make their way to a safe-haven ranch in northern Idaho. The journey requires all their skill and training since communication, commerce, transportation and law enforcement have all disappeared. Once at the ranch, the group fends off vicious attacks from outsiders and then looks to join other groups that are trying to restore true Constitutional law to the country.

Patriots is a thrilling narrative depicting fictional characters using authentic survivalist techniques to endure the collapse of the American civilization. Reading this compelling, fast-paced novel could one day mean the difference between life and death.

James Wesley Rawles has been an enthusiastic survivalist since his teenage years. He is now a survivalist author and lecturer and the editor of www.SurvivalBlog.com. He has a Bachelor of Arts degree from San Jose State University with minor degrees in military science, history, and military history. A former U.S. Army intelligence officer who held a Top Secret security clearance (with Special Background Investigation) and access to Sensitive Compartmented Information (SCI), he was awarded Officer specialty 35A (tactical all-source intelligence officer), and the additional skill identifier 5M (electronic warfare officer). He achieved the rank of Captain, attended the Army NBC defense officer's course, as well as Northern Warfare School at Fort Greeley, Alaska.