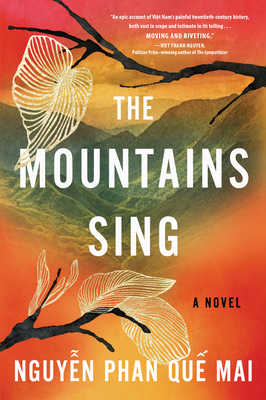 By Que Mai Phan Nguyen
$26.95
We can usually get this book in 3 to 5 days, except during a pandemic. We are doing our best

"[An] absorbing, stirring novel . . . that, in more than one sense, remedies history." —The New York Times Book Review

“A triumph, a novelistic rendition of one of the most difficult times in Vietnamese history . . . Vast in scope and intimate in its telling . . . Moving and riveting.” —VIET THANH NGUYEN, author of The Sympathizer, winner of the Pulitzer Prize

With the epic sweep of Min Jin Lee’s Pachinko or Yaa Gyasi’s Homegoing and the lyrical beauty of Vaddey Ratner’s In the Shadow of the Banyan, The Mountains Sing tells an enveloping, multigenerational tale of the Trần family, set against the backdrop of the Việt Nam War. Trần Diệu Lan, who was born in 1920, was forced to flee her family farm with her six children during the Land Reform as the Communist government rose in the North. Years later in Hà Nội, her young granddaughter, Hương, comes of age as her parents and uncles head off down the Hồ Chí Minh Trail to fight in a conflict that tore apart not just her beloved country, but also her family.

Vivid, gripping, and steeped in the language and traditions of Việt Nam, The Mountains Sing brings to life the human costs of this conflict from the point of view of the Vietnamese people themselves, while showing us the true power of kindness and hope.

Born into the Việt Nam War in 1973, Nguyễn Phan Quế Mai grew up witnessing the war’s devastation and its aftermath. She worked as a street seller and rice farmer before winning a scholarship to attend university in Australia. She is the author of eight books of poetry, fiction, and nonfiction in Vietnamese, and her writing has been translated and published in more than ten countries, most recently in Norton’s Inheriting the War anthology. She has been honored with the Hà Nội Writers Association’s Poetry of the Year 2010 Award, the Capital’s Literature & Arts Award, and First Prize - the Poetry Competition About 1,000 Years Hà Nội, among others. Quế Mai has an PhD in Creative Writing at Lancaster University, United Kingdom. She divides her time between Indonesia and Việt Nam. For more information, visit her at www.nguyenphanquemai.com.

A Most-Anticipated Book of the Year: The New York Times * The Washington Post * PopSugar * The Millions * Library Journal * Lit Hub * The Week * She Reads

"A luminous, complex family narrative . . . The Mountains Sing affirms the individual's right to think, read, and act according to a code of intuitive civility, borne out of Vietnam's fertile and compassionate cultural heritage."
—NPR

"A Vietnamese poet conjures history and fate in a luminous tale that resonates across generations as one family grapples with the psychic residue of war."
—O, The Oprah Magazine

“A sweeping story that positions Vietnamese life within the ​rich and luminous history of national epics like The Tale of Kiều and The Iliad. Expansive in scope and feeling, The Mountains Sing is a feat of hope, an unflinchingly felt inquiry into the past, with the courageous storytelling of the present.”
—Ocean Vuong, author of On Earth We’re Briefly Gorgeous

"This multigenerational tale chronicles the Trần family as a Vietnamese woman visits Hanoi and reflects on the life lessons shared by her late grandmother."
—USA Today, "Five Books Not to Miss"

“The Mountains Sing is an epic account of Việt Nam’s painful 20th century history, both vast in scope and intimate in its telling. Through the travails of one family, Nguyễn Phan Quế Mai brings us close to the horrors of famine, war, and class struggle. But in this moving and riveting novel, she also shows us a postwar Việt Nam, a country of hope and renewal, home to a people who have never given up.”
—Viet Thanh Nguyen, Pulitzer-Prize winning author of The Sympathizer

"Lyrical, wrenching, sometimes painful to read, but ultimately glorious in affirming the resilience of the human spirit. In these traumatic times in which we are facing hard times as a global community as well as a nation, it is life-affirming to be reminded that many in our human family have endured difficult histories before and come through with kindness, kindredness, love, hope, and wonderful novels that will make your heart—as well as the mountains—sing!"
—Julia Alvarez, bestselling author of In the Time of the Butterflies and Afterlife

“The author and poet, known in her native Vietnam as Nguyễn Phan Quế Mai’, tells a comprehensive multigenerational tale, beginning in 1920s Vietnam and continuing through modern wartime. However, the larger history takes a back seat to family dynamics, demonstrating how different generations weather the burdens of conflict.”
—The Washington Post, "Ten Books to Read in March"

“Good literature frees us from being trapped in our own skins by allowing us to identify with characters and see the world through their eyes. Reading this novel, I was moved by Nguyễn Phan Quế Mai’s beautiful, even poetic, depictions of enduring courage. I came away with a deeper understanding of the war in which I fought.”
—Karl Marlantes, bestselling author of Matterhorn, What It’s Like to Go to War,and Deep River

"Lyrical and at once heart-wrenching and hopeful."
—NPR's Book Concierge

"A beautiful evocation of a lost world."
—Christian Kiefer, The Paris Review

“[A] panoramic epic . . . Like the work of Duong Thu Huong, who deserves the Nobel one day, this book brings to life a crucial part of Vietnamese history from within. You heart will not leave this book untouched.”
—Literary Hub

"Stunning . . . Filled with vivid characters and evocative depictions of the Vietnamese landscapes, both urban and rural . . . There’s an important Vietnam War history lesson embedded here, as well, one that is not often available to American readers."
—The Vietnam Veterans of America Book Review

"Nguyễn writes of Vietnamese history with such understanding and humanity that one can easily argue for The Mountains Sing’s status as the great Vietnamese novel of our time."
—diaCRITICS

“Epic in scope, and a celebration of the human spirit, The Mountains Sing is a story you won't soon forget.”
—PopSugar

“This poetic novel illustrates how their sacrifices ripple through [a] family.”
—Real Simple

“The Mountains Sing is a multigenerational epic about a family torn apart by war and the efforts of its various members to survive. It is also the missing narrative of the American War in Vietnam . . . Nguyen’s poetic descriptions and deep affection for her characters allow the reader to feel for the Tran family’s many vicissitudes.”
—The Minneapolis Star-Tribune

"[The] writing is gorgeous and vivid. As you read, you smell the cooking pots and incense around the characters, you run with them, hide with them, feel the searing pain in their bare feet, mourn with them, feel their fury at being attacked and witness the trauma that is etched into their civilian lives as one lash follows another.”
—The Pittsburgh Post-Gazette

“An historical novel that portrays Vietnamese strength in the face of adversity . . . I came away at the end of the book with a new appreciation for the courage and resourcefulness of the Vietnamese.”
—The Washington Independent Review of Books

"Steeped in the storytelling traditions of Vietnam, The Mountains Sing is decadent and heart wrenching, equal parts lush and vibrant in its unfamiliar setting, and just as persistently unrelenting in its depiction of decades worth of war and conflict."
—The Nerd Daily

“A sweeping tale of one family's shifting fortunes in Vietnam across half a century . . . Invitingly and gracefully told . . . A richly imagined story of severed bonds amid conflict.”
—Kirkus Reviews, starred review

“[A] lyrical, sweeping debut novel . . .Nguyễn brilliantly explores the boundary between what a writer shares with the world and what remains between family. This brilliant, unsparing love letter to Vietnam will move readers.”
—Publishers Weekly, starred review

"Balances the unrelenting devastation of war with redemptive moments of surprising humanity."
—Booklist

"Quế Mai has spoken for generations outside of Vietnam, millions upon millions of people bombed out, put underground, forced to flee and desperate to live."
—CounterPunch

"This is a love letter, told honestly and poignantly, to the Vietnamese people, an homage to their dedication to remembrance,  during and after a painful time."
—The Arts Fuse

“Nguyễn Phan Quế Mai’s sweeping tale proves on every page that despite war-time tragedies and numbing ugliness, the human desire to forgive and thrive soars as high as the mountains. An essential read for Vietnamese and Vietnamese-Americans searching to understand their grandparents and parents who lived through the war in Việt Nam.”
—Thanhhà Lai, National Book Award-winning author of Inside Out & Back Again and Butterfly Yellow

“Quế Mai tells the story of the war that tore apart Việt Nam, and of the generation lost to the war, by braiding around it two beautiful strands told by the older and younger generations of a family. This book is an act of love, compassion, and ultimately healing, and very much needed by all who survived the war.”
—Thi Bui, author of The Best We Could Do

“Nguyễn Phan Quế Mai has written a wonderful, intricate story of the lives of a Vietnamese family trying to make it through generations of war. The Mountains Sing is a beautiful story of the simple challenge of keeping a family together and the courage of perseverance. It is told with the sureness of a master storyteller with a poet's spirit. A large and complicated story, marvelous to read.”
—Larry Heinemann, author of Paco's Story, winner of the National Book Award

“A story of loss and sorrow, of longing for peace and normalcy, and—above all—of the triumph of hope over despair, told in the authentic voices of a resilient and resourceful grandmother and her granddaughter.”
—Mai Elliott, Pulitzer-Prize finalist and author of The Sacred Willow: Four Generations in the Life of a Vietnamese Family

“Over the last two decades we have been gifted with works by Vietnamese writers who have brought us into the consciousness of those that Americans saw only as backdrops for their own stories. Nguyễn Phan Quế Mai not only adds to that rich body of work, she daringly transcends it.”
—Wayne Karlin, author of Wandering Souls, winner of the Vietnam Veterans of America Excellence in the Arts Award

“In The Mountains Sing, Nguyễn Phan Quế Mai has found a true and clear voice in English that is rich and compelling the way only those who come to English as a second language can sometimes manage.”
—Bruce Weigl, Pulitzer Prize finalist and author of the bestselling memoir The Circle of Hanh

”A poignant and vivid portrayal of a brutal slice of Vietnamese history from a perspective that is so rarely heard abroad: that of the Vietnamese themselves. We are starkly reminded of how those wars – and wars everywhere – wash over and drown both the guilty and innocent alike.”
—Doreen Baingana, author of Tropical Fish: Stories out of Entebbe

“The structure is clever, the writing often evocative, the characters convincing and very touching and the whole narrative deeply engaging. And this is a first novel! Impressive.”
—Sara Maitland, author of Daughter of Jerusalem, winner of the Somerset Maugham Award

“Inspired by real life events, Nguyễn Phan Quế Mai’s story will thrill, shock and terrify the reader in equal measure. It will also inspire them with its life-affirming qualities of everyday heroism and survival against all the odds.”
—Philip Caveney, author of Sebastian Darke, Alec Devlin and Movie Maniacs novels

“Deep human bonds of family, place, and memory are written of in ways that are often heartbreaking, but show the strength and persistence of those ties. This is a book that glows with spirit and those larger life forces that include love. I look forward to the day I can put this book in readers' hands.”
—Rick Simonson, Elliott Bay Book Company, Seattle