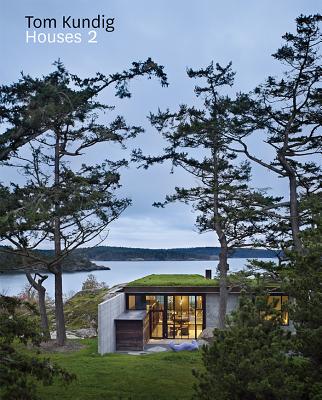 
We can usually get this book in 3 to 7 days, except during a pandemic. We are doing our best
Our 2006 monograph Tom Kundig: Houses was an instant critical and commercial success. Over the past five years, Seattle-based Kundig has continued his meteoric rise, collecting numerous awards, including the 2008 Cooper-Hewitt National Design Award for Architecture Design. Tom Kundig: Houses 2 features seventeen residential projects, ranging from a five hundred-square-foot cabin in the woods to a house carved into and built out of solid rock. In his new work, Kundig continues to strike a balance between raw and refined and modern and warm, creating inviting spaces with a strong sense of place. The houses seamlessly incorporate his signature inventive details, rich materials, and stunning sites from the majestic Northwestern forest to the severe high desert.
Tom Kundig is a Seattle-based architect and a principal of Olson Kundig Architects. In 2008, he received a National Design Award from the Cooper-Hewitt National Design Museum. In 2007, he was recognized by the American Academy of Arts and Letters with an Academy Award in Architecture.
Manipulating and combining familiar cultural and physical material, [Kundig] makes buildings that do unfamiliar, wonderful things... This volume joins Tom Kundig: Houses (2008) as testament to an architectural original at the height of his formidable powers. --Residential Architecture

Handsome... The book's artful shots of [the houses] let you come at them from all angles, creating an illusion of immersion in them. --Seattle Times

Seattle architect Tom Kundig designs striking contemporary homes, 17 of which are featured in a recently-released photo book. "Tom Kundig: Houses 2" follows up on his first collection, released in 2006. --Seattle Post-Intelligencer

From the work explored in Houses 2, its obvious that Kundig has mastered both the simple and the complex-- and that one of the joys of his work is that nothing is overlooked. --Designers Books

The architect follows up his first monograph with a new volume devoted to 17 stunning homes. The far-flung projects-from an industrial-chic apartment in New York City to a cliff-side beach house in Maui-showcase Kundig's inventive use of steel, concrete, and glass as well as his ability to create flexible spaces that incorporate the buildings' natural surroundings. --ArchitecturalDigest.com

For fans of Tom Kundig's houses, both of the books published by Princeton Architectural Press are must-haves. The first is exemplary for presenting the details of his kinetic designs. The sequel makes it clear that his design skills are consistent across close to 20 projects, regardless of location, scale or size. Houses 2 also includes plenty of interior photos. These prove that Kundig equally excels at crafting interior spaces that are appropriate for each house and client and are as varied as his exteriors are kinetic. --archidose.com