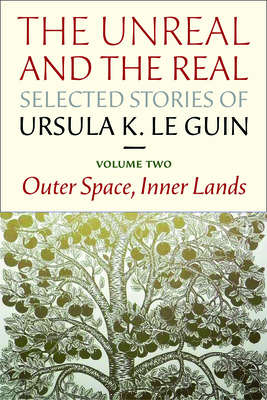 Outer Space, Inner Lands includes many of the best known Ursula K. Le Guin nonrealistic stories (such as The Ones Who Walk Away from Omelas, Semley's Necklace, and She Unnames Them) which have shaped the way many readers see the world. She gives voice to the voiceless, hope to the outsider, and speaks truth to power--all the time maintaining her independence and sense of humor. Companion volume Where on Earth explores Le Guin's satirical, risky, political and experimental earthbound stories. Both volumes include new introductions by the author. Praise for Ursula K. Le Guin's short stories: "She is the reigning queen of...but immediately we come to a difficulty, for what is the fitting name of her kingdom? Or, in view of her abiding concern with the ambiguities of gender, her queendom, or perhaps--considering how she likes to mix and match--her quinkdom? Or may she more properly be said to have not one such realm, but two?"
--Margaret Atwood, New York Review of Books She is a splendid short-story writer.... Fiction, like Borges's, that finds its life in the interstices between the borders of speculative fiction and realism.--San Francisco Chronicle Ursula Le Guin's prose breathes light and intelligence. She can lift fiction to the level of poetry and compress it to the density of allegory.--Jonathan Lethem Like all great writers of fiction, Ursula K. Le Guin creates imaginary worlds that restore us, hearts eased, to our own.--The Boston Globe Admirers of fine literature, fantastic or not, will cherish this rich offering.--Publishers Weekly She wields her pen with a moral and psychological sophistication rarely seen... and while science fiction techniques often buttress her stories they rarely take them over. What she really does is write fables: splendidly intricate and hugely imaginative tales about such mundane concerns as life, death, love, and sex."--Newsweek Le Guin's powerful work illustrates that fantasy need not be escapist, that gender studies need not be dry or strident, and that entertainment need not be mindless.--The Onion Ursula K. Le Guin has published twenty-one novels, eleven collections, essays, poetry, translations, and books for children. She lives in Portland, Oregon.

Ursula K. Le Guin: Ursula K. Le Guin has published eleven short story collections, twenty-one novels, essays, poetry, translations, and books for children, and has received the PEN-Malamud and National Book Awards, among others. Also due this year is Finding My Elegy, New and Selected Poems. She lives in Portland, OR.