The Best Planned City in the World: Olmsted, Vaux, and the Buffalo Park System (Designing the American Park) (Paperback) 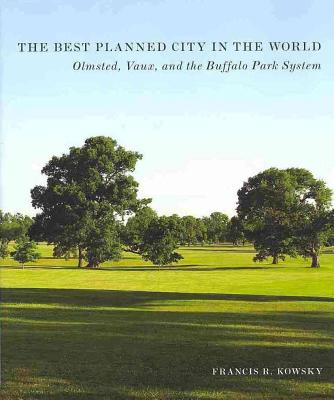 The Best Planned City in the World: Olmsted, Vaux, and the Buffalo Park System (Designing the American Park) (Paperback)


This book has been declared out of stock indefinitely, so we are unlikely to be able to get it.
Beginning in 1868, Frederick Law Olmsted and Calvert Vaux created a series of parks and parkways for Buffalo, New York, that drew national and international attention. The improvements carefully augmented the city’s original plan with urban design features inspired by Second Empire Paris, including the first system of “parkways” to grace an American city. Displaying the plan at the Centennial Exposition in Philadelphia, Olmsted declared Buffalo “the best planned city, as to streets, public places, and grounds, in the United States, if not in the world.” Olmsted and Vaux dissolved their historic partnership in 1872, but Olmsted continued his association with the Queen City of the Lakes, designing additional parks and laying out important sites within the growing metropolis. When Niagara Falls was threatened by industrial development, he led a campaign to protect the site and in 1885 succeeded in persuading New York to create the Niagara Reservation, the present Niagara Falls State Park. Two years later, Olmsted and Vaux teamed up again, this time to create a plan for the area around the Falls, a project the two grand masters regarded as “the most difficult problem in landscape architecture to do justice to.” In this book Francis R. Kowsky illuminates this remarkable constellation of projects. Utilizing original plans, drawings, photographs, and copious numbers of reports and letters, he brings new perspective to this vast undertaking, analyzing it as a cohesive expression of the visionary landscape and planning principles that Olmsted and Vaux pioneered. Published in association with Library of American Landscape History: http://lalh.org/
Francis R. Kowsky is SUNY Distinguished Professor Emeritus.
"The Best Planned City in the World is well organized, very well written, and has the advantage of the author’s long acquaintance with Frederick Withers, Calvert Vaux, and Frederick Law Olmsted. It is an invaluable study."—David Schuyler, author of Sanctified Landscape: Writers, Artists, and the Hudson River Valley, 1820–1909 "In his book, which includes a wealth of historic photographs, postcards, and maps, Kowsky points out Buffalo's park system was never 'divorced from real-life concerns' and took years to reach maturity, given the political and budgetary setbacks that took place along the way."—The Daily Hampshire Gazette "Showcasing original plans, drawings, photographs, reports, and letters, The Best Planned City in the World is a superbly written and presented work of scholarship that is highly recommended."—The Midwest Book Review "In his magnificent new book, with its lucid prose and deft organization, Kowsky follows the evolution of Olmsted and Vaux's astonishing creations in Buffalo--those 'landscapes of recreation, residence, memory, and healing,' as he so gracefully describes them--from their initial design and their growth into maturity through their heartbreaking decline and, in recent times, tentative rebirth. An extraordinary variety and abundance of illustrations fill the book, including photographs new and old, maps, diagrams, paintings, and lithographs. As a physical object, The Best Planned City in the World has a beauty worthy of its subject."—Site/Lines "The author adeptly explains the city politics of the gilded era and Olmsted's privileged outsider role, putting park building into the broader context of city planning. Readers will come away with an appreciation of parks and a personal empathy for park builders. Highly recommended."—Choice "This book is more than a scholarly approach to the planning of Buffalo's parks. Social and political background is woven into [Kowsky's] narrative of landscape design, and the color images create a book that looks as good on a coffee table as in a research library."—Western New York Heritage "Francis Kowsky has painted an excellent portrait of Buffalo in its heyday."—Landscape Architecture Magazine "Kowsky reminds us that parks are not open spaces awaiting development, and that people need trees, meadows, expanses of water, and walking paths, and biking trails. The more dense a city grows, the greater the need. The responsibility of an enlightened public and their leaders is to balance development pressures and the need to expand the tax base with humanity’s need for relaxation and enjoyment. Kowsky’s masterful book makes the visionary landscape and planning principles Olmsted and Vaux pioneered in Buffalo clear, with the hope that restoration efforts will once again allow it to become the best planned city in the world."—Nineteenth-Century Art Worldwide "In 1868, an invitation was made to Frederick Law Olmsted and Calvert Vaux, the men who had designed Central Park, to come upstate and pass their judgments on the opportunity for Buffalo to demonstrate its civic arrival with a grand new park. This is the story that Francis Kowsky tells, and he does so virtually to perfection."—Landscape Journal "The Best Planned City in the World is handsomely designed and generously illustrated.  Its principal narrative follows the ambitious park-making campaign for the city of Buffalo planned by Olmsted and Vaux at a time when their partnership was becoming increasingly well known and their services were in demand."—Public Historian