Master of the House of Darts (Obsidian and Blood #3) (Paperback) 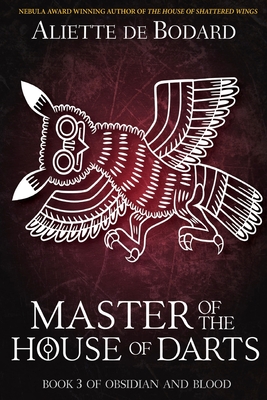 Master of the House of Darts (Obsidian and Blood #3) (Paperback)

This is book number 3 in the Obsidian and Blood series.

The conclusion to the critically acclaimed Obsidian and Blood trilogy: The year is Three Rabbit, and the storm is coming.The Mexica Empire now has a new Emperor, but his coronation war has just ended in a failure: the armies have retreated with a paltry forty prisoners of war, not near enough sacrifices to satisfy the gods. Acatl, High Priest for the Dead, has no desire to involve himself yet again in the intrigues of the powerful. However, when one of the prisoners dies of a magical illness, he has little choice but to investigate. For it is only one death, but it will not be the last.As the bodies pile up and the imperial court tears itself apart, dragging Teomitl, Acatl's beloved student, into the eye of the storm, the High Priest for the Dead is going to have to choose whom he can afford to trust; and where, in the end, his loyalties ultimately lie...REVIEWS: 'Like the previous books, the third in the Obsidian and Blood series abounds with suspects and red herrings. It's a twisty and colourful tale filled with strange gods who demand sacrifices and pain for the least favour. I liked the way Acatl is beginning to question the way things are, and the first stirrings of doubt are awakening in him. He's always had misgivings about his own suitability as High Priest, but in this novel his eyes are opened to some of the deeper wrongs done in the name of the empire, and in the name of people's unswerving loyalty to the gods.' -WarpCore SF'I found this to be the best book of a very good series. The same positives from the first two books are still present, a very easy-to-read writing style (easy to read but not simple or dumbed down), a quick pace, and some incredible world building, incredible accessibility despite the lesser know pantheon and names. Even though the second book dealt with a possible end to the world, MASTER OF THE HOUSE OF DARTS took a similar fate and did it better. Perhaps this was because in many ways it felt more like a fantasy book than a mystery book, which lends itself better to the "save the world" type story. The magic felt more organic here, it was never used as a crutch, or perhaps it was just better explained. There was a bit less travelling this time around, which also led to a tighter story. The ending involved several confrontations that were tense and believable, including some between people who are supposed to be allies... a great end to the series.' -Fantasy Review Barn'Whether you take it as historical noir or as a highly accurate fantasy, it's hard not to enjoy the Obsidian and Blood books-it's a perfect fit for those looking for something different from their usual fare, but still exciting in ways they're used to.' -Guys Lit Wire'Acatl, is very much at the heart of the story, more so perhaps than the plot. He slowly grows into his position as the High Priest of the Dead throughout the trilogy, while the author moves along a parallel path, her narrative growing into its teller and inhabiting his mind with increasing comfort and self-assurance. Acatl is both the hero and the author's avatar as she explores her ideas of what a hero can and should be. Perceptive readers will find Acatl to be a very different kind of hero than we are accustomed to reading about, but the action and the mystery proceed so smoothly that some may never notice the gleeful contrariness that lurks below the surface... Acatl is not, and this is apparent from much earlier in the trilogy, a typical action hero. He is not even a typical mystery solver, at least not in the Western idiom... The entirety of the Obsidian & Blood trilogy gets high marks... for creativity, execution, and gentle subversion. Not just recommended, but, to paraphrase Demi Moore in A Few Good Men, strenuously recommended.' -Two Dudes in an Attic.