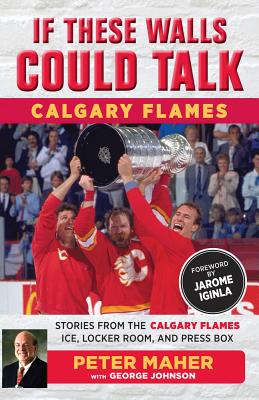 
We can usually get this book in 3 to 7 days, except during a pandemic. We are doing our best
As the radio voice of the Calgary Flames from 1980 until his retirement in 2014, Peter Maher has witnessed more than his fair share of Flames action up close and personal--from the 1989 Stanley Cup championship to the individual brilliance of stars like Lanny McDonald, Al MacInnis, Theo Fleury, and Jarome Iginla. Through singular anecdotes only Maher can tell as well as conversations with current and past players, If These Walls Could Talk: Calgary Flames provides fans with a one-of-a-kind, insider's look into the great moments, the lowlights, and everything in between. No Flames fan will want to miss this book.
George Johnson has chronicled the Calgary Flames since 1984 as a newspaper beat reporter, columnist, and now as web content writer for the club. He is married to Rita, also a sports writer, and they're the proud parents of Michela and Sabrina. Peter Maher began his broadcasting career in 1977 and was the radio voice of the Calgary Flames from 1980 until his retirement in 2014. He was inducted into the Hockey Hall of Fame in 2006 as the Foster Hewitt Memorial Award winner, and in 2010 he called team Canada's gold medal campaign at the Vancouver Olympics.