Queercore: How to Punk a Revolution: An Oral History (Paperback) 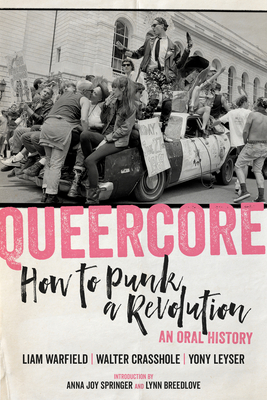 Queercore: How to Punk a Revolution: An Oral History (Paperback)


We can usually get this book in 3 to 7 days, except during a pandemic. We are doing our best
Through exclusive interviews with protagonists like Bruce LaBruce, G.B. Jones, John Waters, and many more, alongside a treasure trove of never-before-seen photographs and reprinted zines, Queercore traces the history of a scene originally "fabricated" in the bedrooms and coffee shops of Toronto and San Francisco by a few young, queer punks to its emergence as a relevant and real revolution. Queercore gets a down-to-details firsthand account of the movement explored through the people that lived it—from punk's early queer elements, to the moments Toronto kids decided they needed to create a scene that didn't exist, to the infiltration of the mainstream by Pansy Division, and the emergence of riot grrrl as a sister movement—as well as the clothes, zines, art, film, and music that made this movement an exciting, in-your-face middle finger to complacent gay and straight society. Queercore will stand as both a testament to radically gay politics and culture and an important reference for those who wish to better understand this explosive movement.
Walter Crasshole is a journalist and editor in Berlin, for Exberliner. Yony Leyser is the writer and director of three award-winning feature films. Liam Warfield is a writer, editor, and educator living in Chicago. Lynn Breedlove is a writer, performer, musician, entrepreneur, and community activist born and raised in the SF Bay Area. Anna Joy Springer is the author of The Vicious Red Relic, Love, The Birdwisher, and A Murder Mystery for Very Old Young Adults.