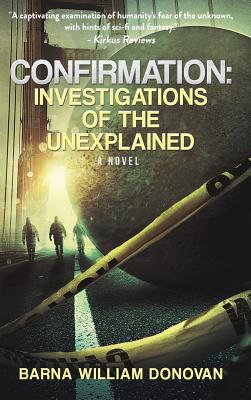 THE EVIDENCE OF ANOTHER WORLD IS HERE...

In Mount Shasta City, California. In New Jersey. In San Diego. Then in Scotland, in Italy, and Cairo. In dozens of locations around the world, 20-ton granite globes suddenly appear. They usually turn up overnight, sometimes in remote locations and other times in the middle of cities in places no one could have put them without detection. For the first time, the world is witnessing a truly unexplainable phenomenon.

AND THE THREAT IS REAL...

As Rick Ballantine and Cornelia Oxenburg, cast members of the low-rent supernatural reality show "Confirmation: Investigations of the Unexplained," quickly realize, the globes' greatest effect is the way they make people speculate about their origins and purpose. Some think the globes are placed by aliens. Others think it's all a hoax. Many more fear sinister government conspiracies behind it all. But each of these points of view believes they're absolutely right...and others who disagree are dead wrong...and dangerous...and must be dealt with by any means necessary Before the true, incredible origin of the globes is finally revealed, the "Confirmation" cast comes to see the extremes people are capable of when their beliefs are challenged and threatened...even in their own group.