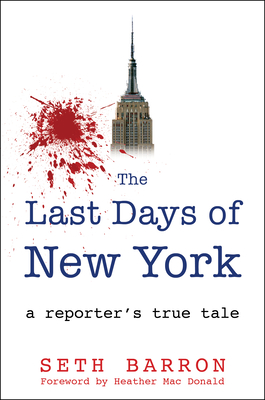 
We can usually get this book in 3 to 7 days, except during a pandemic. We are doing our best
The growing number of elected Socialists and other progressives, including Mayor de Blasio, have given Barron enough targets to fill a book, The Last Days of New York, that even the most dyed-in-the-wool lefties ought to read. -- Errol Lewis, New York Daily News "Seth Barron has covered New York for a very long time. He has a new book The Last Days of New York. The title says it all." -- TUCKER CARLSON A must read." -- BRIAN KILMEADE, host of Fox & Friends

In this gripping new book, Seth Barron warns the city may not recover from the preening, disastrous incompetence of Mayor de Blasio.'' -- RAY KELLY, Police Commissioner of New York City

Barron cuts through the noise and provides a devastating account of a city's decline under the delusional leadership of socialists and con men." -- GREG KELLY, host of Newsmax Greg Kelly Reports

THE LAST DAYS OF NEW YORK: a reporter's true tale tells the story of how a corrupted political system hollowed out New York City, leaving it especially vulnerable, all in the name of equity and "fairness."

When, in the future, people ask how New York City fell to pieces, they can be told--quoting Hemingway--"gradually, then suddenly." New Yorkers awoke from a slumber of ease and prosperity to discover that their glorious city was not only unprepared for crisis, but that the underpinnings of its fortune had been gutted by the reckless mismanagement of Bill de Blasio and the progressive political machine that elevated him to power.

Faced with a global pandemic of world-historical proportions, the mayor dithered, offering contradictory, unscientific, and meaningless advice. The city became the world's epicenter of infection and death. The protests, riots, and looting that followed the death of George Floyd, and the resurgence of the Black Lives Matter movement--cheered on and celebrated by the media and political class--accelerated the crash of confidence that New York City needed in order to rebound quickly from the economic disaster.

Through reckless financial husbandry; by sowing racial discord and resentment; by enshrining a corrosive pay-to-play political culture that turned City Hall into a ticket office; and by using his office as a platform to advance himself as a national political figure, Bill de Blasio set the stage for the ruin of New York City.

As New Yorkers slowly adjust to their new reality, they ask themselves how we had been so unprepared--not so much for the coronavirus, which caught everyone by surprise--but for the economic shock, which was at least foreseeable. THE LAST DAYS OF NEW YORK is the story of how a lifelong political operative with no private-sector experience assumed control of a one-party city where almost nobody bothers to vote, and then proceeded to loot the treasury on behalf of the labor unions, race hustlers, and connected insiders who had promoted him to power.

Bill de Blasio's failure to manage the outbreak of Covid-19 is well established. But what is less well understood is how poorly he managed the city up to the point of the pandemic, and how his mismanagement left New York City vulnerable to the social, economic, and cultural shocks that have leveled its confidence and brought into question its capacity to absorb the creative energies of the world, and reflect them back in the form of opportunity and wealth, as it has done for hundreds of years. At a moment when socialist currents are stirring throughout America, Bill de Blasio's term in office in New York City is a demonstration of what those impulses actually produce: debt, decay, and bloat.

THE LAST DAYS OF NEW YORK: a reporter's true tale is a history of New York City from its recovery from the recession of 2008-2009 through the triple disaster of the pandemic, civil unrest, and collapse in revenue of 2020. Mayor Bill de Blasio, now widely appreciated as the WORST mayor in the history of the city, is presented as the instrument of decline: a key symptom of the rot that expedited the city's downfall.

HEATHER MAC DONALD (New York, NY) is the national bestselling author of The War on Cops, the Thomas W. Smith Fellow at the Manhattan Institute, and a contributing editor of City Journal. A former aspiring academic with roots in deconstruction and postmodernism, she has been the target of violent student protest for her work on policing. Mac Donald holds a B.A. from Yale and an M.A. from Cambridge in English, and a J.D. from Stanford. In 1998, Mac Donald was appointed to Mayor Rudolph Giuliani's task force on the City University of New York. In 2004, she received the Civilian Valor Award from the New Jersey State Law Enforcement Officers. She is a recipient of the 2005 Bradley Prize. In 2008, Mac Donald received the Integrity in Journalism Award from the New York State Shields, as well as the Eugene Katz Award for Excellence in the Coverage of Immigration from the Center for Immigration Studies. In 2012, she received the Quill & Badge Award for Excellence in Communication from the International Union of Police Associations. Mac Donald's work at City Journal has canvassed a range of topics, including higher education, immigration, policing and racial profiling, homelessness and homeless advocacy, criminal-justice reform, and race relations. Her writings have appeared in The Wall Street Journal, The Washington Post, The New York Times, The Los Angeles Times, The New Republic, The New Criterion and Partisan Review, among other publications. The author lives & works in the New York metro area. https: //www.manhattan-institute.org/expert/heather-mac-donald