Brutal Minds: The Dark World of Left-Wing Brainwashing in Our Universities (Hardcover) 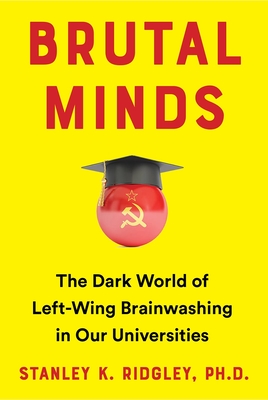 Brutal Minds: The Dark World of Left-Wing Brainwashing in Our Universities (Hardcover)

"If you are scratching your head as to how radicals could have seized control in Washington, and of American media, while defaming American democracy as a 'white supremacist' nightmare, look no further than the left's transformation of American universities into ideological boot camps for Marxist treachery. BRUTAL MINDS is a model of clarity and straight talk about this national tragedy, whose destructive energies have yet to run their course."

Much of university life is controlled by subsidized paranoiacs, amateur psychotherapists, neo-Marxist totalitarians, "student affairs professionals" imbued with authoritarian mentality, and racialist thought reformers who run workshops that destroy family ties and traditional beliefs to clear the way for new relationships grounded in racialist ideology. These are the brutal minds who threaten and abuse students in the name of an academic fraud called "antiracist pedagogy."

An educational charade masks activities and ideology as dangerous as those that inspired Communist China's tragic Cultural Revolution. This book strips away the fa ade of the modern American university to reveal the malignant bureaucratic viscera inside the institution. It is a dark world, an anti-intellectualist sanctuary where brutal minds find purpose, protection, camaraderie, subsidy, and power.

Dr. Ridgley's book calls us to action to halt this anti-intellectual takeover of higher education and to restore the greatness of one of Western civilization's most brilliant creations, the American University.

"A tale of how one of history's great institutions--the American university--is undergoing an infiltration by an army of mediocrities whose goal is to destroy it as an institution of knowledge creation and replace it with an authoritarian organ of ideology and propaganda."

--From the Preface to BRUTAL MINDS

STANLEY K. RIDGLEY, PH.D. (PHILADELPHIA, PENNSYLVANIA) is Clinical Full Professor of Management at Drexel University's LeBow College of Business. Dr. Ridgley has also studied at Moscow State University and the Institut de Gestion Sociale in Paris. He is a former Military Intelligence Officer who served in West Berlin and near the Czech-German border, where he received the George S. Patton Award for Leadership from the 7th Army NCO Academy. In addition to his teaching, Dr. Ridgley lectures widely in the United States and internationally. He is Drexel's faculty sponsor for Turning Point USA, serves on Drexel's Faculty Senate, and on Drexel University's Institutional Review Board. He is a frequent contributor to national media including Newsmax and American Greatness, and is also the highly praised faculty instructor for the course "Strategic Thinking" in the DVD series TheGreatCourses.com.The author lives & works in the Philadelphia metro area.brutalminds.com