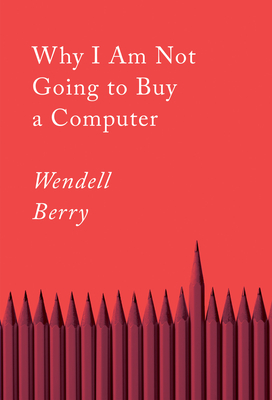 A brief meditation on the role of technology in his own life and how it has changed the landscape of the United States from "America's greatest philosopher on sustainable life and living" (Chicago Tribune).

"A number of people, by now, have told me that I could greatly improve things by buying a computer. My answer is that I am not going to do it. I have several reasons, and they are good ones."

Wendell Berry first challenged the idea that our advanced technological age is a good thing when he penned "Why I Am Not Going to Buy a Computer" in the late 1980s for Harper's Magazine, galvanizing a critical reaction eclipsing any the magazine had seen before. He followed by responding with "Feminism, the Body, and the Machine." Both essays are collected in one short volume for the first time.

WENDELL BERRY is an essayist, novelist, and poet. In 2010, he was awarded the National Humanities Medal by President Barack Obama. He lives with his wife, Tanya Berry, on their farm in Henry County, Kentucky.

"In writing about the fate of the natural world, Berry is a prophet of the domestic." —Dean Kuipers, Los Angeles Review of Books

"Compelling, luminous . . . our modern-day Thoreau. He is unlike anybody else writing today. He writes at least as well as George Orwell and has an urgent message for modern industrial capitalism . . . nobody can risk ignoring him." —Andrew Marr, New Statesman

"It's no great observation to note that we live in an incredibly polarized time, but, curiously, Berry doesn't fit neatly into the conservative or liberal camp. There is just enough in his writing to both satisfy and provoke those of all ideological allegiances . . . In these times we could all use his patient instruction." —Jonathan Foiles LCSW, Psychology Today

"Berry reminds us that to take small solutions off the table is also a kind of giving up. Some conservationists believe that because ecological problems are structural, there is no point in growing and cooking your own food, in setting down roots in a community, in being kind to your neighbors . . . You may as well drive as much as you want, waste paper towels, and buy meat from corporations that keep pigs in excrement-coated cages. Berry reminds us that to live this way is to forfeit our souls. It is important--no matter what is going on at a macro level—to be kind to your family, your neighbors and the land." —Colette Shade, The New Republic

"Wendell Berry is the poet laureate of America's farmland. . . . his writing has plenty of relevance: his scathing views on the chasm between what we need and what we consume are persuasive, as is his observation that change is often mistaken for progress." —DJ Taylor, The Guardian

"[Berry] speaks out powerfully and poignantly on behalf of family farmers, their land, and their small towns. His spiritual vision of life is informed by a deep love of nature, a profound regard for the details of place, a respect for small-scale economies, and an advocacy of wise stewardship of the earth." —Frederic Brussat and Patricia Campbell Carlson, Spirituality & Practice

"A fascinating tribute to the life of the land . . . Berry's writings are timelier than ever." —Laura Garmeson, Financial Times

"The welcome voice of a gentle radical . . . Wendell Berry's writings, for half a century, have examined the gulf between what we're capable of doing and what we ought to do. That gulf keeps getting bigger, and still the message goes unheeded." —Matt Sturrock, The Times Literary Supplement