The Investigator: Demons of the Balkan War (Hardcover) 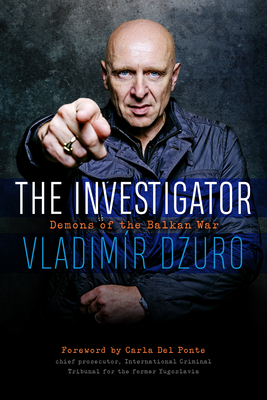 The Investigator: Demons of the Balkan War (Hardcover)


We can usually get this book in 3 to 7 days, except during a pandemic. We are doing our best
The war that broke out in the former Yugoslavia at the end of the twentieth century unleashed unspeakable acts of violence committed against defenseless civilians, including a grizzly mass murder at an Ovčara pig farm in 1991. An international tribunal was set up to try the perpetrators of crimes such as this, and one of the accused was Slavko Dokmanović, who at the time was the mayor of a local town. Vladimír Dzuro, a criminal detective from Prague, was one of the investigators charged with discovering what happened on that horrific night at Ovčara. The story Dzuro presents here, drawn from his daily notes, is devastating. It was a time of brutal torture, random killings, and the disappearance of innocent people.

Dzuro provides a gripping account of how he and a handful of other investigators picked up the barest of leads that eventually led them to the gravesite where they exhumed the bodies. They were able to track down Dokmanović, only to find that taking him into custody was a different story altogether. The politics that led to the war hindered justice once it ended. Without any thoughts of risk to their own personal safety, Dzuro and his colleagues were determined to bring Dokmanović to justice. In addition to the story of the pursuit and arrest of Dokmanović, The Investigator provides a realistic picture of the war crime investigations that led to the successful prosecution of a number of war criminals.

Visit warcrimeinvestigator.com for more information or watch a book trailer.
Vladimír Dzuro worked as a criminal detective between 1983 and 1995, initially investigating violent crime with the Criminal Investigation Department in Prague and later at the National Central Bureau of Interpol in Prague. He currently works at the United Nations Office of Internal Oversight Services as chief of the New York Headquarters Office.
“This is a detective story with a difference. . . . The Investigator is a raw and unique firsthand account of an extraordinary pursuit of justice in the face of absolute horror.”—Julian Borger, Pulitzer Prize–winning journalist and world affairs editor for the Guardian


“Personal accounts of investigations of war crimes, such as this one by Vladimír Dzuro, breathe life into the abstract project of accountability and show the challenges of operating a criminal justice system in an international environment.”—Louise Arbour, United Nations special representative for international migration (2017–present) and chief prosecutor for the International Criminal Tribunal for the former Yugoslavia (1996–99)


“In a captivating personal account, Vladimír Dzuro brings to life the early days of the International Criminal Tribunal for the former Yugoslavia and describes in detail how its investigators and prosecutors worked against incredible odds to bring to justice some of the worst war criminals of the twentieth century. It is the story of the birth of the modern era of international justice and of how, despite expectations to the contrary, this undertaking became a success.”—Clint Williamson, U.S. ambassador at large for war crimes issues (2006–9)


“The Investigator is a fascinating story of a fight for truth and justice by bringing to trial in the International Criminal Tribunal for the former Yugoslavia the brutal murderers and assassins from the Balkan War. It is brilliant storytelling of this mass tragedy from a key investigator.”—Philip Zimbardo, professor emeritus of psychology at Stanford University


“This was the most difficult war of all—a war between neighbors and friends, a war between people who had lived together in a functioning community for decades. We know that the physical wounds of war often heal faster than the psychological wounds. Bringing to justice those who perpetrated such heinous crimes will go far toward healing the psychological wounds. The efforts of Vladimír Dzuro and his colleagues did much to facilitate this healing process.”—Jacques Paul Klein, former U.S. ambassador and former under-secretary-general of the United Nations

“To my knowledge Vladimír Dzuro’s book is the first to explain the complexities, the frustrations, and finally the satisfaction of conducting investigations into the serious crimes that were committed during the conflict in the former Yugoslavia. It is above all the story of the people who suffered from those crimes and the investigators and lawyers who worked tirelessly to try and ensure that the alleged perpetrators faced trial for their part in those crimes.”—Judge Joanna Korner, former prosecution senior trial attorney, International Criminal Tribunal for the former Yugoslavia


“The Investigator is rife with demons. Vladimir Dzuro details his life as an international criminal investigator, and like many of his colleagues at the Yugoslav and Rwanda Tribunals, he witnessed the unfathomable daily. Skills, teamwork, wit, and luck (bad and good) allowed him to squeeze justice out of profound depravity. Dzuro’s book chronicles the real slog of international investigators and prosecutors. Hollywood fiction would shrink from his searing view of war crimes from under the wet tarpaulin of a mass grave. Notwithstanding, Dzuro ponders his experience by observing that ‘humanity owes it to the scarred and broken people who open up their hearts to you.’ It is also true that the best international investigators, like Dzuro, open up their hearts, in turn.”—Patricia Viseur Sellers, special advisor for gender to the prosecutor of the International Criminal Court


“For the war to really end, when the military conflict was over, the citizens of the former Yugoslavia needed closure that could only be provided by impartial justice. Our friend Vladimír Dzuro and his colleagues from the International Criminal Tribunal for the former Yugoslavia provided the only option. They put their own lives at risk so that others could have justice, and this book eloquently tells their story.”—Ralph R. Johnson, U.S. ambassador to Sarajevo (1999–2001); and Lt. Col. Jacqueline M. Johnson, U.S. Army (Ret.), executive officer in the Office of the High Representative, Sarajevo (2000–2001)


“The Investigator reminds us that the United Nations is a body that can, at will, search out and hold accountable those individuals who orchestrate and enforce extreme violence on noncombatants. . . . Vladimír Dzuro’s years of work with the International Criminal Tribunal for the former Yugoslavia are a testament to the tenacity of persons dedicated to the investigations of war crimes. He and his colleagues deserve not only our admiration but most certainly our attention, as atrocities and genocide permeate the beginnings of the twenty-first century. Dzuro’s narrative is fascinatingly clear and engaging; it also serves as a warning.”—Ralph J. Hartley, adjunct professor of anthropology, University of Nebraska–Lincoln