Disaster on the Spanish Main: The Tragic British-American Expedition to the West Indies during the War of Jenkins' Ear (Paperback) 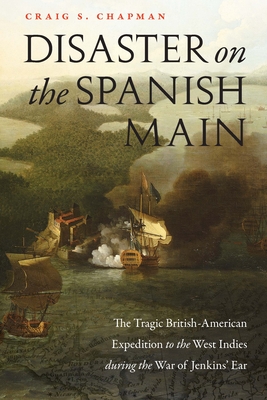 Disaster on the Spanish Main: The Tragic British-American Expedition to the West Indies during the War of Jenkins' Ear (Paperback)


We can usually get this book in 3 to 7 days, except during a pandemic. We are doing our best
Disaster on the Spanish Main unveils and illuminates an overlooked yet remarkable episode of European and American military history and a land-sea venture to seize control of the Spanish West Indies that ended in ghastly failure. Thirty-four years before the Battles of Lexington and Concord, a significant force of American soldiers deployed overseas for the first time in history. Colonial volunteers, 4,000 strong, joined 9,000 British soldiers and 15,000 British sailors in a bold amphibious campaign against the key port of Cartagena de Indias. From its first chapter, Disaster on the Spanish Main reveals a virtually unknown adventure, engrosses with the escalating conflict, and leaves the reader with an appreciation for the struggles and sacrifices of the 13,000 soldiers, sailors, and marines who died trying to conquer part of Spain’s New World empire.

Disaster on the Spanish Main breaks new ground on the West Indies expedition in style, scope, and perspective and uncovers the largely untold American side of the story.
Craig S. Chapman spent thirty years managing dual careers in telecom network sales and the U.S. Army and National Guard. He is the author of Battle Hardened: An Infantry Officer’s Harrowing Journey from D-Day to VE Day and More Terrible Than Victory: North Carolina’s Bloody Bethel Regiment, 1861–65. Chapman lives and writes in Raleigh, North Carolina.

"Disaster on the Spanish Main is an excellent read for anyone with an interest in the British military in the period, particularly because the campaign helped set the stage for British success in the Seven Years' War."—A. A. Nofi, NYMAS Review

“A vivid account of a dramatic episode in British imperial history, written with great verve.”—Jeremy Black, author of The British Seaborne Empire


“This work is a splendid operational history, drawing on both traditional narratives and the latest research in English and Spanish. Chapman has provided a riveting study of a sadly neglected episode.”—Richard Harding, author of The Emergence of Britain’s Global Naval Supremacy: The War of 1739–1748


“A well-researched, expertly written narrative history of the first military campaign in which American soldiers fought for empire in a distant land, and which until now has remained relatively unknown.”—Glenn F. Williams, author of Dunmore’s War: The Last Conflict of America’s Colonial Era


“Craig Chapman’s fine treatment of an all but forgotten episode in the history of the Americas offers scholarly and general readers much to admire and much to learn. Historians who have lamented the lack of a comprehensive, deeply researched account of the Cartagena Expedition of 1741 need complain no longer. Readers interested in the American colonial period will find it hard to put down this vivid narrative of a one of the greatest fiascos in British military and naval history. Above all, Disaster on the Spanish Main will compel every reader to confront matters as vital today as they were three centuries ago: the folly of imperial ambition and the tragedy of war.”—Fred Anderson, author of Crucible of War: The Seven Years’ War and the Fate of Empire in British North America, 1754–1766