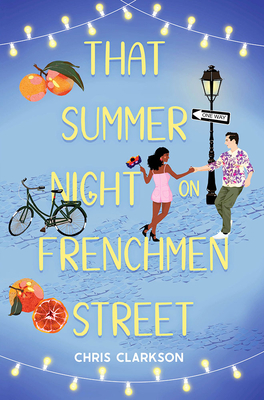 In this modern-day young adult take on Breakfast at Tiffany's, two teens from vastly different worlds discover that sharing their strengths, including the love of their friends and family, may just be the path to finding wholeness within themselves.

Being there for her family is the most important thing to Jessamine Monet. And her family is complicated. Her twin brother Joel has a secret boyfriend, and her transgender cousin Solange is flourishing, despite the disapproval of Solange's dying mother. Yet Jessamine doesn't mind being caught up in family drama. Being busy keeps the water at bay -- the water of memories, of Katrina, of past trauma. So when Tennessee Williams -- a rich white boy named after the writer -- asks her out, she hesitantly says yes. He'll be like a library book, she figures, something to read and return. Falling for him is another burden she can't afford to carry.

Tennessee has always lived his life at the mercy of his mom's destructive creativity and his dad's hypermasculine expectations. Jessamine's caring and aloof nature is a surprisingly welcome distraction. While she fights her attraction to him, Tennessee is pulled into her inner family circle and develops a friendship with Joel's boyfriend, Saint Baptiste. Together Saint and Tennessee bond over the difficulty of loving the emotionally unavailable Monet twins.

As senior year progresses, old traumas and familial pressures rise higher than hurricane waves. Can this group of friends make peace with each other, their families, and most importantly, with themselves?

Debut author Chris Clarkson studied English literature at the University of Maryland, where he earned his bachelor's degree. He works during the day as an outreach coordinator, where along with many other responsibilities in this role, he regularly assists with the implementation of diversity initiatives. When he is not writing, Chris spends his time as a wandering local, discovering his muse in coffee shops, street art, and old bookstores. He lives in New Orleans with his dog Avery and a collection of notebooks filled with words for stories waiting to be brought to life. Find him on Twitter at @ChrisWrites3434.