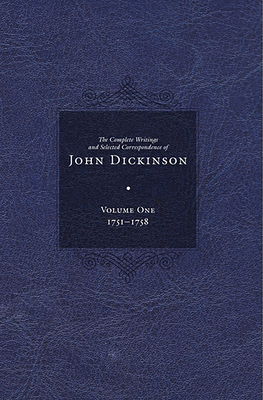 This is book number 1 in the The Complete Writings and Selected Correspondence of John Dickinson series.

The Complete Writings and Selected Correspondence of John Dickinson, vol. 1 inaugurates a multivolume documentary edition that will, for the first time ever, provide the complete collection of everything Dickinson published on public affairs over the course of his life. The documents include essays, articles, broadsides, resolutions, petitions, declarations, constitutions, regulations, legislation, proclamations, songs and odes. Among them are many of the seminal state papers produced by the first national congresses and conventions. Also included are correspondences between Dickinson and some of the key figures of his era. This edition should raise Dickinson to his rightful place among America’s founding fathers, rivaled in reputation only by Benjamin Franklin before 1776. Dickinson was celebrated throughout the colonies, as well as in England and France, as the great American spokesman for liberty, and the documents in this edition evidence his tireless political work and unmatched corpus.
JANE E. CALVERT is Associate Professor of History at the University of Kentucky and author of Quaker Constitutionalism and the Political Thought of John Dickinson.

JOHN DICKINSON (November 8, 1732–February 14, 1808) is known as the “Penman of the Revolution.” He served as a delegate for Pennsylvania in the Continental Congress (1774–1776) and later as a delegate from Delaware in the Constitutional Convention of 1787.