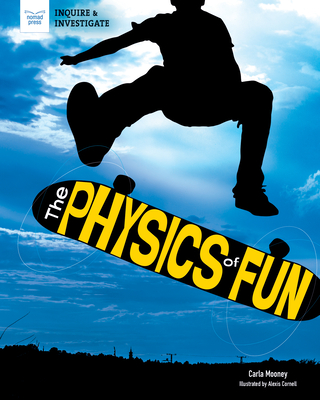 Learn physics on the fly with this activity-based book for ages 12 to 15 that explores the connections between science, sports, and entertainment

Why are you able to jump so much higher from a trampoline than from the ground? What forces are at work when you do an ollie on a skateboard? How does a counter rotation work on a snowboard?

The answer is: physics In The Physics of Fun, kids ages 12 to 15 explore the science behind awesome activities that kids love. What do skateboarding, snowboarding, trampolining, singing in a band, and playing video games all have in common, besides being fun? They are all made possible with physics From Newton's laws of motion to the behavior of electrons, the science of physics is an integral part of any amusement park, play center, trampoline park, or home gaming center.

The Physics of Fun offers detailed explanations of the science behind five familiar pastimes, along with hands-on investigations that use the scientific and engineering design methods to enable kids to apply their learning to a wide array of science challenges. Projects include using a skateboard to demonstrate inertia, investigating the transfer and conservation of energy on a trampoline, observing sound waves with water, and building a guitar to explore the sound waves made by its strings.

Links to online media, discussion questions, and career connections offer middle schoolers the chance to do some real, hands-on science around activities they already love to do Additional materials include a glossary, index, and a list of current reference works, websites, and internet resources.