Kids of King: Faith, Family, and Love will see you through it all! (Paperback) 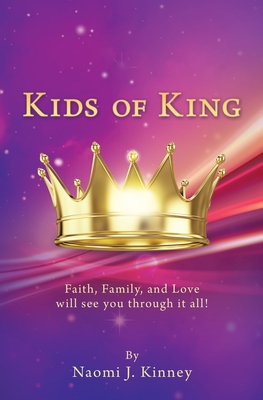 Kids of King: Faith, Family, and Love will see you through it all! (Paperback)


We can usually get this book in 3 to 7 days, except during a pandemic. We are doing our best
(This book cannot be returned, even for store credit.)
Naomi is the youngest of the nine Kinney children to Robert and Alfreda Kinney, and growing up in the 60s they had a truly idyllic life, living in the small predominantly Black community of Evanston in mid-town Cincinnati, Ohio. King Records was only two blocks from her childhood home, and this was the place her father found solace in singing and occasionally recording in the same historic place as did many great musicians such as James Brown and Bootsy Collins. But her father's troubled situation and the challenges of this era in America caused many constraints for this large Catholic family. However, with the support of family and friends, having developed a strong loving bond among themselves, and by receiving lots of love from their faith community, they survived many difficulties together. This is Naomi's ("the baby's") glimpse into their past and the history of their hometown (Cincinnati, Ohio), highlighting some of their treasured happy memories, the tragedies that occurred among them influenced by the society at the time, and yet how they each found their missions through it all. They are indeed the "Kids of King".