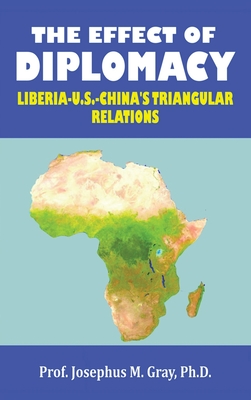 By Prof Josephus M. Gray
$39.99
We can usually get this book in 3 to 5 days, except during a pandemic. We are doing our best

This book characterizes the existing relationships among Liberia, China and the United States of America as "triangular". The three countries sampled are known to be democratic states but run different forms of governments- both Liberia and the United States run a Republican form of government, while China runs a socialist system of government. Both United States and China have been chosen for the purpose of this study because they are stable, and are the world's economic powers. The two countries are actively engaged with African leaders, governments and states. These two states have been selected because they depict and reflect an alteration in governance, resources and economic powers. This book presents an in-depth, insightful analysis of critical issues on the continent and beyond. These issues include Africa in International Relations, the new scramble for the continent's richer resources, and the core causes of poverty, corruption, bad governance and counter-terrorism in Africa. The deep political "love" towards African governments and states by the two global economic powers in recent time realism argues that it is it that has made the continent the frontline competition for oil, and the two main competitors for Africa are U.S. and China. This study provides a vivid picture of Liberia, U.S. and China's triangular relations, a detailing of the three countries long standing bilateral and multilateral relationship. It goes further to discuss few African states relations with China and the U.S. Both U.S. and China are the world's two leading economic powers and are permanent members of the United Nations Security Council with veto and are competing actors on the international stage. In recent time the two countries have been engaged in a trade war;, a situation which is having an adverse effect on global trade. The dissertation, which traces the history of Liberia, U.S. and China's triangular relations, their engagement in Africa and foreign aid support towards African governments and states, is a unique research and stands as a "milestone", and "result-oriented". The book is based on proven scholarly writings. The study attempts to validate existing publications or wide-ranging perceptions about the world's leading economic powers- China and U.S presence in Africa. The study highlights China and the U.S. presence in Africa and their engagement with African leaders, governments and nations. Chapter one is the general introduction and presents the background of the study, statement of the problem, research focus, objectives, justification, and significance of the entire research. Chapter two traces the history and examines Liberia, U.S. and China engagement and presence in Africa and the impacts of foreign aid in Africa; and chapter three provides the methods employed during the study. These methods include research strategy and design, data collection as well as data analysis, sampling method, structure review and limitations of the study. Chapter four provides a vivid picture of Liberia, U.S. and China's triangular relations, while chapter five evaluates the successes and challenges of Liberia's foreign relations, covering the last seven decades from one regime and to the other, from the presidency of ex-president Joseph Jenkins Roberts to present. Chapter Six provides insights of America and China's foreign aid to Africa and also analyzed U.S. foreign assistance to African governments and states, and compares that to China's foreign aid assistance to African government. Chapter Seven of the study emphases on the curse of rampant corruption and the scourge of bad governance by African leaders and governments and the role of corrupt African leaders, political bureaucracies, foreign capitalists and authoritarian officials. Chapter Eight assesses the role of contemporary Liberian media and its impact on democratic governance and national development. The work discusses in detail the weste.

About the author: Prof. Josephus Moses Gray, Ph.D. a native born Liberian, hails from the Southeastern Village of Kayken, Barclayville District in Grand Kru County. He has achieved the highest level of academic mastery in his chosen field, and works as a university professor with impressive credentials including a Ph.D. (Summa Cum laude) in International Relations and Diplomacy from the CEDS University located at 37 Quai de Grenelle, 75015 Paris, France. He holds a Bachelor's Degree in Communication (Print Journalism) and a Master's Degree in International Relations from the University of Liberia Graduate Program in International Studies. He also holds post-graduate diplomas and certificates in Foreign policy Studies, International Relations, Diplomacy, Print Journalism, Development Communication, Research Methodology, and Leadership from Paris, France; Genera, Switzerland; Beijing, China; Washington, D.C., USA; Cape Town, South Africa; Rabat, Morocco; Accra, Ghana; Dakar, Senegal and Monrovia, Liberia. Dr. Gray currently serves as Associate Professor of International relations at the University of Liberia Graduate Program in International Studies, and Dean of Liberia College (College of social Sciences and Humanities), University of Liberia. He earlier served as Senior Policy Advisory to the Minister of foreign Affairs of the Republic of Liberia, and as a Senior Research Fellow at the International Institute of Research for Strategic and Foreign Policy Studies in Paris, France. Dr. Gray has worked in several strategic positions in both public and private sectors in Senior Policy Advisor to the Minister of foreign Affairs, Assistant Foreign Minister for Public Affairs; Political Counselor at the Embassy of Liberia in Paris, France, and Charge D' Affairs at Liberia Permanent Mission to the Swiss Federation and the United Nations in Genera, Switzerland. Dr. Gray can be reached for official business via email: graymoses@yahoo.com or grayjm@ul.edu.lr.