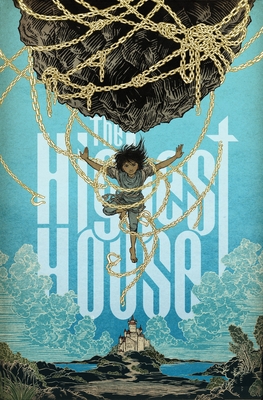 
This book has been declared out of stock indefinitely, so we are unlikely to be able to get it.
To be born a slave is a fact, not a fatality. And facts can be changed.

In the country of Ossaniul, there is a fortress that is as disproportionate as it is inaccessible: the Highest House. Its masters, the noble family of Aldercrest, reign over a veritable army of slaves. At the bottom of the ladder, young Moth performs the most thankless tasks and has little hope of living past childhood. Until the day he meets Obsidian, a mysterious prisoner of the House who whispers to him in his sleep. If Moth does what he asks, Obsidian will give him fortune and glory. And there's every indication that Obsidian can make good on his promises. Will Moth accept the offer?

Through a subtle alternate history, The Highest House takes us to a fictional country reminiscent of the Balkan kingdoms of the 16th century. Mike Carrey and Peter Gross (Lucifer, The Unwritten) draw from this context a captivating fantasy narrative that reflects on the human soul, the corrupting power of slavery, and the inequalities of class, all from the different perspectives of the House's many inhabitants. Both immediate and timeless, The Highest House is a multifaceted fantasy sure to stay with readers long after the final page has turned.
Mike Carey got into writing through comic books, where his horror/fantasy series Lucifer garnered numerous international awards and was nominated for five Eisners. From there he moved into novels and screenplays, while still maintaining a presence in the comics world. His movie Frost Flowers, an erotic ghost story, is currently in production with Hadaly/Bluestar Pictures. He lives in London, England, about as far as you can get from the centre of the city and still have access to the London Underground train network. His wife, Linda, writes fantasy for young readers under the pseudonym A.J. Lake. They have three children and an implausibly beautiful cat.

Peter Gross is the co-creator and artist of Vertigo's Eisner-nominated, NY Times Bestseller series The Unwritten, and co-creator and artist of American Jesus/Chosen with Mark Millar. He also illustrated two of Vertigo's longest running series, Lucifer and Books of Magic (including having written 24 issues in the series).
"A truly unique story, and Gross and Alquier do a fantastic job of creating its visuals." –Bleeding Cool

"A masterful comic by exceptionally talented creators" -Den of Geek