Just Beyond: The Horror at Happy Landings (Paperback) 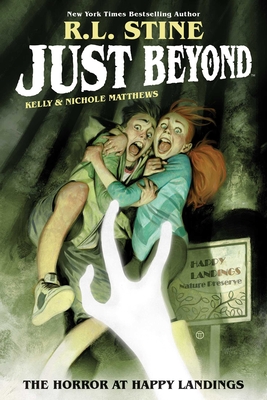 Just Beyond: The Horror at Happy Landings (Paperback)


We can usually get this book in 3 to 7 days, except during a pandemic. We are doing our best
Two Martians unexpectedly land on Earth and have to get home - by highjacking the bodies of two kids and leaving a trail of trouble in their wake that no one may be able to fix!

Family camping trips are supposed to be fun, but for Parker, Annie, and the Walden family, they’re an absolute nightmare!

After a creepy, unidentified bird attacks their mom in the forest, Parker and Annie find themselves face to face with two strange creatures that suddenly enter the kids’ brains and take control of their bodies. Can Parker and Annie break loose of this horrific control and convince their family of what’s happening, or will the creatures take over their lives for good?
is an American novelist, short story writer, television producer, screenwriter, and executive editor.

Stine has been referred to as the "Stephen King of children's literature"[1] and is the author of hundreds of horror fiction novels, including the books in the Fear Street, Goosebumps, Rotten School, Mostly Ghostly, and The Nightmare Room series. Some of his other works include a Space Cadets trilogy, two Hark gamebooks, and dozens of joke books. As of 2008, Stine's books have sold over 400 million copies.