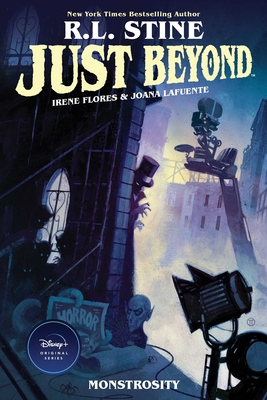 
On Our Shelves Now as of 24 Hours Ago. Please call first to confirm.
Ruthie and Ezra Dillon’s dad and uncle just bought an old Hollywood movie studio, known for all the best horror flicks of the 50s but those classic on screen monsters have returned to the real world with a vengeance!

Ruthie and Ezra Dillon’s dad and uncle just bought an old Hollywood movie studio, known for all the best horror flicks of the 50s!

The family plans to revive the old place and start making scary movies for the modern era, which Ruthie and Ezra are eager to star in. What they don’t realize, though, is that the old classic monsters like Wolfenscreem, the Lagoonatics, and the Wasp-Keeper are all a little bit TOO real…

...and they’re coming back with a vengeance!

Stine has been referred to as the "Stephen King of children's literature"[1] and is the author of hundreds of horror fiction novels, including the books in the Fear Street, Goosebumps, Rotten School, Mostly Ghostly, and The Nightmare Room series. Some of his other works include a Space Cadets trilogy, two Hark gamebooks, and dozens of joke books. As of 2008, Stine's books have sold over 400 million copies.