Intelligence for Dummies: Essays and Other Collected Writings (Hardcover) 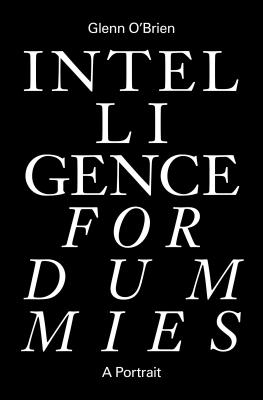 Intelligence for Dummies: Essays and Other Collected Writings (Hardcover)


We can usually get this book in 3 to 7 days, except during a pandemic. We are doing our best
"Enclosed in this beautiful package, please find: an agile mind, a perfect style, a canny and undeceivable heart, and a welcome, enduring presence in the reader's life." --Michael Chabon A portrait of a keen social observer at the center of the last 50 years of cultural life, captured through a vivid selection of O'Brien's own writings on music to fashion to downtown art and, just as importantly and unexpectedly, the political temperature of America. Glenn O'Brien collaborated with visual artists, writers, fashion houses, and musicians throughout his almost 50-year career. Intelligence for Dummies gathers Glenn O'Brien's essays, aphorisms and tweets, to create a portrait of the artist as cultural bellwether, complimented by artwork and photographs from his collaborators. A full color, hardcover edition, Intelligence for Dummies is a deeply personal aper u into Patti Smith and Jean Michel Basquiat's New York, and the culture of money that ensued. It also reveals O'Brien's incisive and prescient understanding of America's political culture, and of our current president.
Glenn O'Brien (1947-2017) was one of the most widely read and influential magazine writer-editors of the last fifty years and was a hall-of-fame copy - writer and creative director whose ads are ingrained in popular culture. Born in Cleveland, Ohio, O'Brien studied at Georgetown University and Columbia University Graduate School of the Arts. After college, he joined Andy Warhol's Interview Magazine, which he helped shape over his 20-year association. He wrote regular columns in publications including Artforum, GQ, Harper's Bazaar, Paper, Purple, and Spin, and was widely read on the subjects of art, fashion, and music. Beloved as GQ's "Style Guy", his witty advice column was syndicated in GQ editions around the world. O'Brien's wrote dozens of books, including 2011's best-selling How to Be A Man, published in six countries.