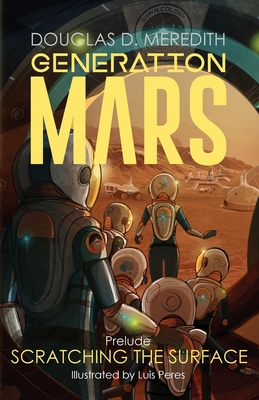 Featured in Emily Lakdawalla's Recommended Space Books for Kids, from The Planetary Society

Generation Mars is hard science fiction, scaled for kids. Following sisters Cas and Ori, the series explores the nature of life for the first children born on Mars. In this introduction to the series, the sisters have their first experience with the surface of Mars, a milestone that turns out to be bigger than anyone expected. Future books will address fundamental issues of survival on Mars: air, shelter, water, food, etc. The series strives for scientific accuracy while telling the very human stories of children growing up in an environment unlike any that children have grown up in before.

From the back cover:

Instead, they will have blue sunsets. They might camp on the tallest volcano or in the deepest canyon in the solar system. They will ride in rovers and rockets. They will walk through rocky red landscapes that have changed little in billions of years. They will be part of the development of an entirely new branch of human existence.

First among these children of Mars is Cas. She and her sister, Ori, live underground as protection against the radiation that reaches the surface of Mars. They have never seen the surface of their planet.

I'll be honest with you: this book is a bit of an oddball. Scratching the Surface started as a picture book. This is evident in the light and nonintimidating plot. But it outgrew that form rather quickly, as I added point of view from other characters and technological concepts I wanted readers to experience.

My intent was to write something for early readers that was more advanced than they might typically encounter but still somewhat age appropriate. So much early reader text tends to be either silly or bland. I wanted to create something entirely different. In that, I'm pretty sure I've succeeded. What remains to be seen is whether this will appeal to these readers and their parents.

I hope it does. I have many ideas for these characters and look forward to continuing their story in books to come.