The Turks: The Central Asian Civilization That Bridged the East and the West for Over Two Millennia - volume 2 (Paperback) 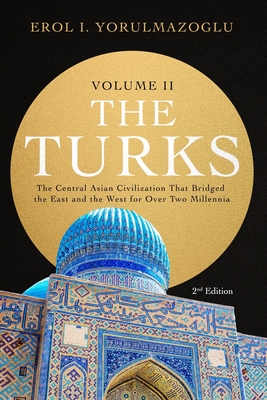 The Turks: The Central Asian Civilization That Bridged the East and the West for Over Two Millennia - volume 2 (Paperback)


We can usually get this book in 3 to 7 days, except during a pandemic. We are doing our best
(This book cannot be returned, even for store credit.)
The Turks comes in two volumes, each sold separately. Volume 2 of The Turks continues from where Volume 1 left off. After the Turks migrated away from the Far East, they came into contact with Islam once they reached the Near East. By mastering their military skills they became the masters of the Islamic world nearly for a millennium. Second edition provides some added valuable information to the first edition publication. Transitioning from nomadic states of the Eurasian steppes to forming formidable empires, they proved to be part of the evolving world history. In fact, as they stretched their influence into the continents of Asia, Europe, and Africa, they contributed to the development of Western in addition to Asian cultures.By controlling the Silk Road - an important historic avenue that allowed not only the transfer of merchandise across the vast territories of Eurasia but also facilitated the transfer of information and cultural traits between the West and the East - Turks influenced the evolution of the Western civilization for more than a millennium.The Turks will provide you with what you did not know about them. This volume also shows how the Turkish speakers evolved into their present-day demographic state. Today, the Turks live in the republics of Azerbaijan, Kazakhstan, Kyrgyzstan, Turkmenistan, Turkey, and Uzbekistan. Furthermore, they are found in multiple autonomous regions across Eurasia and eastern Turkestan in China.Examining the history of the Turks will give you a different perspective in what you learned about the world history. The two volumes of "The Turks" provide evidence-based history of a nation that proudly displays its Central Asian culture, which transformed into its modern-day form with a fusion multiple traditions from Arabs, Chinese, Greeks, Indians, Persians, and so on.