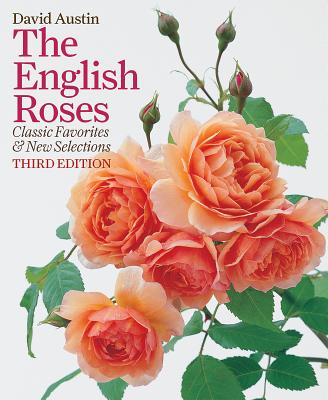 David Austin is one of the world's leading rose hybridizers. He has spent decades creating and perfecting his roses, which combine the charm and fragrance of the Old Roses with the repeat-flowering and wide color range of the traditional tea roses, also called Modern Roses.

David Austin English Roses are vigorous, hardy, heat-resistant and disease-free. The bushes have a pleasant rounded habit and bear large, delicately scented blooms throughout the summer. The relative ease of growing a David Austin English Rose has inspired gardeners everywhere to try their hand. Interest in North America was so overwhelming that in 1999, the company opened an office in Tyler, Texas, which ships to the USA and Canada.

The roses are organized into seven classification groups. Each rose profile features a description and cultivation techniques opposite a stunning full-page photograph. There are 32 new photographs, 22 of them of the new varieties released between 2011 and 2016. They are:

David also recounts how he set out to create the English roses, beginning with his first, the fragrant Constance Spry, released in 1961. In eloquent prose he reveals his passion for these roses and his lifelong dedication to their improvement. He describes their growth habits, flower form, foliage and name origin, and provides valuable cultivation tips and instruction on how to cut and arrange roses.

This book displays beautifully why David Austin English Roses are beloved by gardeners everywhere. It is an essential selection for every rose lover and gardener. Artists will enjoy it for the glorious photographs.

David Austin has been breeding and hybridizing roses for more than 60 years. His English Roses have achieved international recognition and are sought by gardeners around the world. He and his son, David J.C. Austin, operate David Austin Roses, one of the world's largest rose nurseries. David Austin's books include the best-selling David Austin Roses, which won a Garden Writer's Guild Award. He has been awarded numerous medals for his contribution to horticulture.