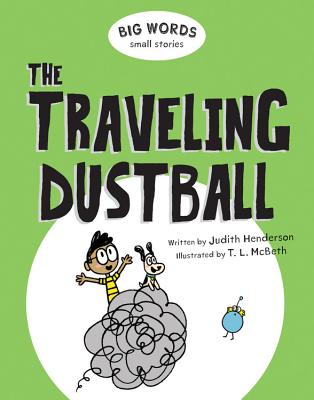 
This book has been declared out of stock indefinitely, so we are unlikely to be able to get it.
The second collection in the Big Words Small Stories series follows the adventures of Davey and his dog, Abigail. When Davey tries to sweep an enormous dustball out the front door, the wind lifts the dustball into the air --- and Davey and Abigail with it! Their flying dustball takes them on adventures to places around the world, including Italy, China and Switzerland, which makes for some great stories (five, to be exact)! As with the first book in the series, the mischievous Sprinkle Fairy and her helpers have slipped a Big Word into each story. The stories include Big Words like lollygagging, irksome and phenomenon! What kid could resist trying those out?!

Told through Judith Henderson's hilarious dialogue and T.L. McBeth's fun illustrations, these stories are highly accessible and simple to read. Add that to the stories' mix of deadpan and slapstick humor, and you've got a pitch-perfect book for emerging readers that's both entertaining and enriching. The Big Words included --- with a kid-friendly pronunciation and definition for each --- help young readers to build their vocabularies. For a bonus at the end of the book, a “Small Play on Big Words” uses all the Big Words together.
Judith Henderson is an Emmy Award-winning children's TV composer and producer. She is the author of the Big Words Small Stories series. Judith lives in Montreal, Quebec.

T. L. McBeth is the illustrator of Stegothesaurus and the Big Words Small Stories series. His work has been displayed at the Society of Illustrators. He lives in New York City.

A dustball of fun ...—Kirkus Reviews

... will appeal to young readers learning new words and making the transition to chapter books.—CM Magazine