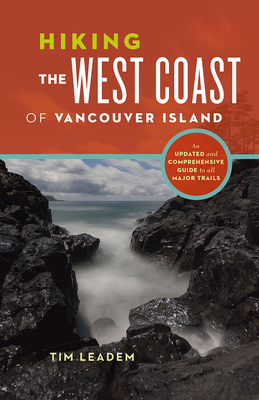 
On Our Shelves Now as of 24 Hours Ago. Call first to confirm.
The rugged west coast of Vancouver Island offers some of the most spectacular and storied hiking in the Pacific Northwest. Home to the world-famous West Coast Trail, once a lifeline for marooned sailors and still among the most breath-taking yet demanding hikes on the continent, the island's western shores also feature lesser-known coastal trails for all abilities. From the tidal pools and pocket beaches of the Juan de Fuca Marine Trail to the craggy surf-swept shores of Shushartie Bay and the North Coast Trail, the ten areas covered in this volume will give you a taste of the region's best hiking terrain. This third, fully updated and expanded edition, delivers the detailed trail descriptions, insider tips and clear two-colour maps that hikers have come to rely on plus two entirely new sections on the wild and challenging North Coast Trail extension from Cape Scott and the remote and rarely visited Tatchu coastal hike on the Rugged Peninsula. Less-experienced hikers may enjoy the Juan de Fuca Trail, a southern extension of the West Coast Trail from Port Renfrew to Jordan River, or the trails through the stunning old-growth forest of Carmanah-Walbran Provincial Park. For day trippers, there's the Wild Pacific Trail, a northern extension of the West Coast Trail that begins in Ucluelet and heads north over headlands and white sand beaches toward Long Beach and Tofino. And for those who prefer more remote hiking, the northern part of the island offers the rugged Nootka Trail, described by Backpacker magazine as a wild, historic and beautiful trail, or the boardwalk at Cape Scott, where black bears share the windswept beaches with kayakers and the ghosts of shipwrecked crews. From planning the trip, to getting to and from the trailheads, to choosing the most scenic campsites, this is an indispensable guide for the thousands of hikers who use the West Coast Trail each year and for those who will want to use its alternatives.
Tim Leadem is a lawyer by profession and a member of the bar in British Columbia. An avid hiker and climber for more than 40 years, he has hiked in locations all over the globe, but especially in British Columbia and on Vancouver Island. He also holds a master's degree in zoology.