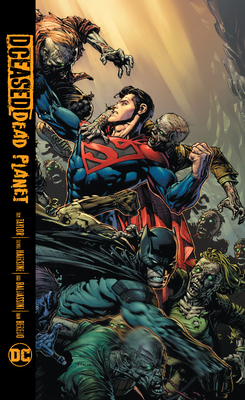 
On Our Shelves Now as of 24 Hours Ago. Call first to confirm.
Five years have passed since Earth was evacuated following the deadly outbreak of the Anti-Life Equation.

The survivors have found a home on Earth 2, but it’s a tenuous existence until the new Justice League receives a faint distress call from Earth. Can life possibly still exist on this dead planet? The new League, led by Damian Wayne, Jon Kent, and Cassie Sandsmark—the new Batman, Superman, and Wonder Woman—must return home but who—or what—is lying in wait for these fearless heroes?

Tom Taylor is the creator of the Aurealis Award-winning graphic novel series The Deep (which tells the adventures of a multiethnic family of underwater explorers who live on a submarine). The Deep has been optioned by Technicolor to be turned into a 26-episode CG animated series. He is perhaps best known for the bestselling DC Comics series Injustice: Gods Among Us, Earth 2, Batman/Superman, and his many Star Wars series. Taylor has written for DC Comics, Dark Horse Comics, IDW Publishing, WildStorm, 2000 AD, and Gestalt Comics.

Trevor Hairsine is a British artist who got his start working for the Judge Dredd Megazine before continuing his career with Marvel Comics.