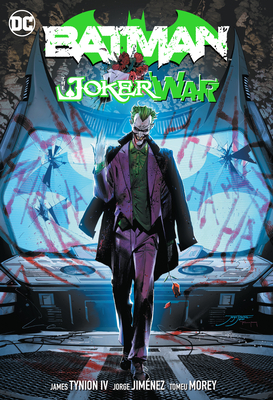 
We can usually get this book in 3 to 7 days, except during a pandemic. We are doing our best
This is it: the Clown Prince of Crime battles the Dark Knight Detective head-to-head for the last time. And one way or another, this will be the final chapter of their agelong conflict.

The Clown Prince of Crime and the Dark Knight Detective go head-to-head for the last time. The Joker has never wanted to win before, he's never wanted his battle with Batman to end, but now his motivation has shifted. As The Joker's plan to assemble an army materializes, the only person who can save Batman from the brink of true madness is Harley Quinn. And while all this is happening, the villains of Gotham City are waiting out the carnage Joker has unleashed--and Catwoman assembles an army of her own!

Collects Batman #95-100.
James Tynion IV started in the comics business assisting Scott Snyder in writing backup stories for Snyder's groundbreaking Batman series. Tynion soon began writing Talon, a series that spun out of the hugely popular "Batman: The Court of Owls" story line. He has also written Batman: Detective Comics, Constantine: The Hellblazer, and Red Hood and the Outlaws and is currently at the helm of Justice League Dark.