War of the Beasts and the Animals (Paperback) 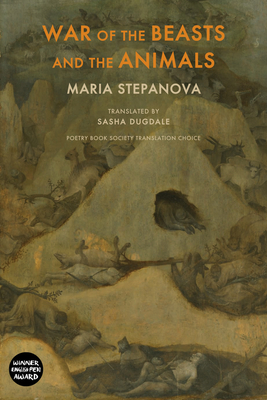 War of the Beasts and the Animals (Paperback)


We can usually get this book in 3 to 7 days, except during a pandemic. We are doing our best
War of the Beasts and the Animals is Russian poet Maria Stepanova's first full English-language collection. Stepanova is one of Russia's most innovative and exciting poets and thinkers, and founding editor of Colta.ru, an online independent site which has been compared to Huffington Post in its status and importance. Immensely high-profile in Russia for many years, recognition in the West has followed the publication of her documentary novel In Memory of Memory, first in German translation in 2018 and now with Sasha Dugdale's English translation - published by New Directions in the US - longlisted for the International Booker Prize in 2021.

War of the Beasts and the Animals includes her recent long poems of conflict 'Spolia' and 'War of the Beasts and Animals', written during the Donbas conflict, as well as a third long poem 'The Body Returns', commissioned by Hay International Festival in 2018 to commemorate the Centenary of the First World War. In all three long poems Stepanova's assured and experimental use of form, her modernist appropriation of poetic texts from around the world and her constant consideration of the way that culture, memory and contemporary life are interwoven make her work both pleasurable and deeply necessary. This collection also includes two sequences of poems from her 2015 collection Kireevsky: sequences of 'weird' ballads and songs, subtly changed folk and popular songs and poems which combine historical lyricism and a contemporary understanding of the effects of conflict and trauma.

Stepanova uses the ready forms of ballads and songs, but alters them, so they almost appear to be refracted in moonlit water. The forms seem recognisable, but the words are oddly fragmented and suggestive, they weave together well-known refrains of songs, apparently familiar images, subtle half-nods to films and music.