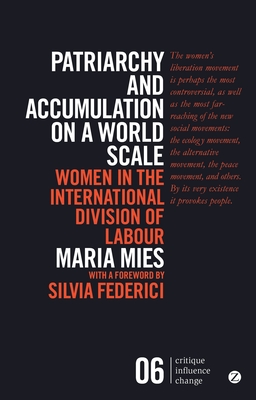 By Maria Mies
$24.64
We can usually get this book in 3 to 5 days, except during a pandemic. We are doing our best

'It is my thesis that this general production of life, or subsistence production - mainly performed through the non-wage labour of women and other non-wage labourers as slaves, contract workers and peasants in the colonies - constitutes the perennial basis upon which 'capitalist productive labour' can be built up and exploited.'

First published in 1986, Maria Mies’s progressive book was hailed as a major paradigm shift for feminist theory, and it remains a major contribution to development theory and practice today.

Tracing the social origins of the sexual division of labour, it offers a history of the related processes of colonization and 'housewifization' and extends this analysis to the contemporary new international division of labour. Mies's theory of capitalist patriarchy has become even more relevant today.

This new edition includes a substantial new introduction in which she both applies her theory to the new globalized world and answers her critics.

Maria Mies is a Marxist feminist scholar who is renowned for her theory of capitalist-patriarchy, which recognizes third world women and difference. She is a professor of sociology at Cologne University of Applied Sciences, but retired from teaching in 1993. Since the late 1960s she has been involved with feminist activism. In 1979, at the Institute of Social Studies in The Hague, she founded the Women and Development programme. Her other titles published by Zed Books include The Lace Makers of Narsapur (1982), Women: The Last Colony (1988), Patriarchy and Accumulation on a World Scale (1999), The Subsistence Perspective (1999) and Ecofemimism (2014)