Prince of the Spear: The Sunsurge Quartet Book 2 (Paperback) 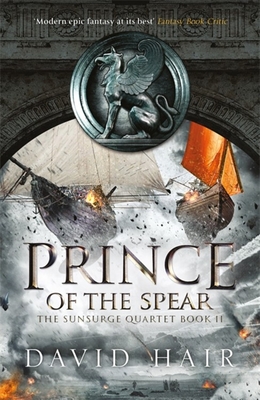 Prince of the Spear: The Sunsurge Quartet Book 2 (Paperback)

This is book number 2 in the The Sunsurge Quartet series.

Desperate for the next Game of Thrones? Prince of the Spear continues the Sunsurge Quartet and delivers a full-on fix of epic fantasy.

The unthinkable has happened. With the Leviathan Bridge critically damaged and its towers unable to control the skies between Yuros and Antiopia, the East has invaded the West. A vast windfleet, constructed in secret, is winging across the Pontic Sea

The holy Shihad has begun.

The Rondian Empire is divided and weak. Empress Lyra has barely survived a coup, triggered by a masked cabal whose members still remain concealed in the highest echelons of her court. Only Lyra's secret affinity to the heretical power of dwyma saved her - but that affinity is also her most dangerous weakness.

As empires clash, lives are torn apart and long-held beliefs are overthrown by circumstance and desperation. A young queen whose court is riddled with traitors turns to the wrong people in her hour of need. Two princes clash in the skies, the fate of two nations riding on their skill. Two brothers must reconcile disparate cultures to regain their kingdom. An idealistic rabble-rouser sees a chance to strike. And a small group of dwymancers grope blindly for knowledge in a race against time before the masked Cabal strike again.
David Hair, an award-winning writer of fantasy, has been inspired by his travels around the globe. He was born in New Zealand and after spending time in Britain and Europe, he moved to India for several years, which sparked both the Moontide Quartet and the Ravana series. He now lives in Bangkok, Thailand. His epic fantasy sagas The Moontide Quartet and The Sunsurge Quartet, and The Return of Ravana, his retelling of the Indian epic The Ramayana, are all published by Jo Fletcher Books.
I continue to be impressed by the way Hair takes some very familiar, almost trite, ideas and spins them in a new way. Epic fantasy is not dying my friends, it is just moving in new directions—Fantasy Review Barn on Unholy War

So epic, that it gets you so involved and is such an investment in time and emotion, that there is a little sting of regret that the ending had to come at all—British Fantasy Society on the Moontide Quartet

The sense of chaos, endless politicking between factions and urge by characters to make sense out of events beyond their control is palpable as the pace becomes more and more frantic—Upcoming4.me on the Moontide Quartet

Vivid, dynamic characters and terrific world building . . . Readers of epic fantasy should definitely check out this series—Bibliosanctum on the Moontide Quartet

The writing is crisp, the characters full of vigour and desires which when they become banded together really gives the story something to focus upon as the bonds grow stronger—Falcata Times on the Moontide Quartet

Hair is adept at building characters as well as worlds, and his attention to his female players is welcome in a genre that too often excludes them.—Kirkus Reviews

I enjoyed the characters and their struggles and schemes . . . Classic immersive fantasy—Ribbon Reviews on Empress of the Fall

Promises to recall epic fantasy's finest—Tor.com on the Moontide Quartet

Represents modern epic fantasy at its best.—Fantasy Book Critic on the Moontide Quartet

For anyone looking for a new sprawling fantasy epic to stick their teeth into, Empress Of The Fall is an ultimately satisfying journey into a fascinating and chaotic landscape—SciFiNow on Empress of the Fall