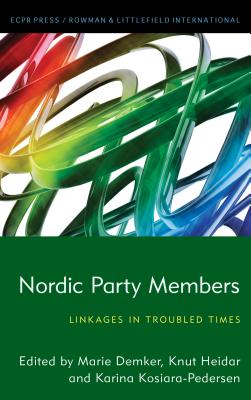 
We can usually get this book in 3 to 7 days, except during a pandemic. We are doing our best
Political parties provide continuity at the elite level and among the mass electorate in times when "populist" forces threaten the stability of many western democracies. The parties, however, have experienced turbulent times with declining memberships among the established parties, volatile electorates and the emergence of new parties. This edited collection aims to make an analytical contribution to what "party democracy" means, how to study it and add to our knowledge of who the party members are, what they do and how influential they are in policy-making processes. Clearly, elections provide linkage at regular intervals. Does party membership, even after membership decline, provide a supplementary, representative linkage that supports democracy and stability in "post-cleavage" societies? Nordic party systems have kept central elements of their old "five party systems", with (mostly) large social democratic parties and a variable geometry of the conservative, liberal, agrarian and left socialist forces. They have experienced the electoral rise of new parties and - in particular - the increasing strength of vote-catching, anti-establishment parties; in most countries nurtured by anti-immigration sentiments. In contrast to much recent scholarship, this book investigates the stable element in Nordic mass politics, namely the parties as membership organisations: How many members? Why do they join parties? How much do they participate? Do they experience political influence? The overall question is to what extent the party organizations, which have been heavily "statified" by public subsidies, keep up linkage to civil society through their membership.
Marie Demker, Professor of Political Science and Dean at the Faculty of Arts, Gothenburg. Knut Heidar is Professor of Political Science at the University of Oslo, Norway. Karina Kosiara-Pedersen is Associate Professor in Political Science at University of Copenhagen.