Cathedrals of Steam: How London’s Great Stations Were Built – And How They Transformed the City (Hardcover) 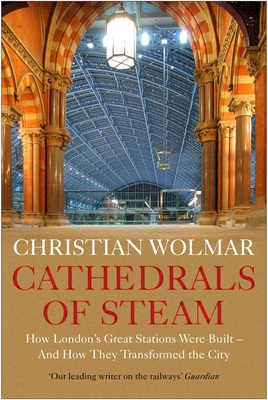 Cathedrals of Steam: How London’s Great Stations Were Built – And How They Transformed the City (Hardcover)


This book has been declared out of stock indefinitely, so we are unlikely to be able to get it.
London hosts a dozen major railway stations, more than any comparable city. King's Cross, St Pancras, Euston, Marylebone, Paddington, Victoria, Charing Cross, Cannon Street, Waterloo, London Bridge, Liverpool Street and Fenchurch Street—these great termini are the hub of London's transport system and their complex history, of growth, decline and epic renewal has determined much of the city's character today. Christian Wolmar tells the dramatic and compelling story of how these great cathedrals of steam were built by competing private railway companies between 1836 and 1900, reveals their immediate impact on the capital and explores the evolution of the stations and the city up to the present day.
Christian Wolmar writes regularly for a wide variety of publications, including the Independent, Evening Standard, and Rail magazine, and appears frequently on TV and radio as a commentator on transport issues. His previous books include Fire and Steam; Blood, Iron and Gold; Engines of War; The Great Railway Revolution; and To the Edge of the World.
"London's twelve great rail termini are the epic survivors of the Victorian age. They are the cathedrals of transportation. Wolmar brings them to life with the knowledge of an expert and the panache of a connoisseur. His words render them indestructible." —Simon Jenkins, author of England's Hundred Best Views, and Mission Accomplished?

"Wolmar compellingly describes how engineers and architects creating terminus stations harked back to classical or Gothic styles. But, with the advantage of iron and glass, they could erect giant structures in months not centuries, whose scale justified the description “cathedrals of steam”." —Michael Portillo,  British journalist, broadcaster, and former Conservative politician

"Every London commuter should read this book – if commuting as we once knew it ever starts up again (and even if it doesn't). Fascinating histories abound from Queen Victoria’s specially arranged signals to the driver to slow down on the way from Slough to Paddington, to Thomas Hardy’s job of excavating graves to make way for tracks at St Pancras... " —Tom Chesshyre, author of eight travel books

"In this delightful homage to the capital’s mighty icons of the railway age Wolmar is a worthy successor to Betjeman." —Michael Williams, Best-selling author of On the Slow Train

"A wonderful tour, full of vivid incident and surprising detail. Station by station, it also adds up to a portrait of London through the railway age and into our own time." —Simon Bradley, author and the joint editor of the celebrated Pevsner Architectural Guides