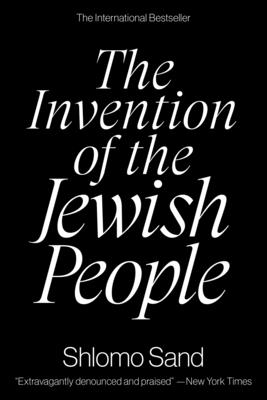 A historical tour de force that demolishes the myths and taboos that have surrounded Jewish and Israeli history, The Invention of the Jewish People offers a new account of both that demands to be read and reckoned with. Was there really a forced exile in the first century, at the hands of the Romans? Should we regard the Jewish people, throughout two millennia, as both a distinct ethnic group and a putative nation—returned at last to its Biblical homeland?

Shlomo Sand argues that most Jews actually descend from converts, whose native lands were scattered far across the Middle East and Eastern Europe. The formation of a Jewish people and then a Jewish nation out of these disparate groups could only take place under the sway of a new historiography, developing in response to the rise of nationalism throughout Europe. Beneath the biblical back fill of the nineteenth-century historians, and the twentieth-century intellectuals who replaced rabbis as the architects of Jewish identity, The Invention of the Jewish People uncovers a new narrative of Israel&rsquo;s formation, and proposes a bold analysis of nationalism that accounts for the old myths.

After a long stay on Israel&rsquo;s bestseller list, and winning the coveted Aujourd&rsquo;hui Award in France, The Invention of the Jewish People is finally available in English. The central importance of the conflict in the Middle East ensures that Sand&rsquo;s arguments will reverberate well beyond the historians and politicians that he takes to task. Without an adequate understanding of Israel&rsquo;s past, capable of superseding today&rsquo;s opposing views, diplomatic solutions are likely to remain elusive. In this iconoclastic work of history, Shlomo Sand provides the intellectual foundations for a new vision of Israel&rsquo;s future.

&ldquo;Israel&rsquo;s Declaration of Independence states that the Jewish people arose in the Land of Israel and was exiled from its homeland. Every Israeli schoolchild is taught that this happened during the period of the Roman rile, in 70 CE. The nation remained loyal to its land, to which it began to return after two millennia of exile. Wrong, says the historian Shlomo Sand, in one of the most fascinating and challenging books published here in a long time. There was never a Jewish people, only a Jewish religion, and the exile also never happened—hence there was no return.&rdquo;—Tom Segev, Haaretz

&ldquo;The reader will have understood the message: what this well-documented and fearless book explodes is the myth of a unique Jewish people, miraculously preserved, in contrast to all the other peoples, from external contamination ... [Sand&rsquo;s] conclusions, which are prudently formulated, nonetheless lead one towards a sole solution: the construction of a secular and democratic Israel.&rdquo;—Jacques Julliard, Le Nouvel Observateur

&ldquo;Shlomo Sand has written a remarkable book ... Anyone interested in understanding the contemporary Middle East should read it.&rdquo;—Tony Judt, author of Postwar: A History of Europe Since 1945

&ldquo;The Invention of the Jewish People is an indispensable challenge and a very complex intellectual exercise ... a more secure society [than Israel] would include the book in the core curriculum of its school system.&rdquo;—Avraham Burg, former Chairman of the Jewish Agency for Israel, Yedioth Ahronoth