Flights of Fancy: Defying Gravity by Design and Evolution (Paperback) 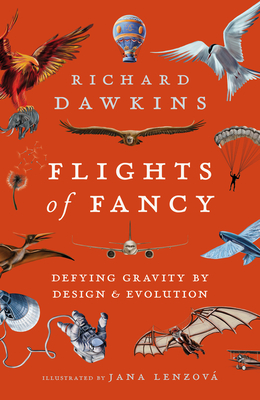 Flights of Fancy: Defying Gravity by Design and Evolution (Paperback)

The Wonder of Flight. The Science of Evolution. From both, Richard Dawkins weaves a fascinating and beautifully illustrated account of how nature and humans have learned to overcome the pull of gravity and take to the skies.

Do you sometimes dream you can fly like a bird? Gliding effortlessly above the treetops, soaring and swooping, playing and dodging through the third dimension. Computer games, virtual reality headsets, and some drugs can lift our imagination and fly us through fabled, magical spaces. But it's not the real thing. No wonder some of the past's greatest minds, including Leonardo da Vinci's, have yearned for flying machines and struggled to design them.

Flights of Fancy is a book about flying – all the different ways of defying gravity that have been discovered by humans over the centuries and by other animals over the millions of years, from the mythical Icarus, to the sadly extinct but magnificent bird Argentavis magnificens, to the Wright Flyer and the 747. But it also means flights of digression into more general ideas and principles that take off from a discussion about actual flight.

Fascinating and elegantly written, this is a unique collaboration between one of the world's leading zoologists and a talented artist, and perfect for enquiring teenage minds.

Richard Dawkins is one of the world's most eminent writers and thinkers, and a major contributor to the public understanding of the science of evolution. The award-winning author of the Selfish Gene, The Blind Watchmaker, The God Delusion and a string of other bestselling science books, he is a Fellow of the Royal Society and of the Royal Society of Literature.

Jana Lenzova born and raised in Bratislava, Slovakia, is an illustrator, translator and interpreter. Her two great passions are languages and drawing. The former led to the latter. After she had been commissioned to translate The God Delusion by Richard Dawkins into Slovak, she began contributing to his books as an illustrator.
"One of the best non-fiction writers alive today." —Steven Pinker

"It is richly illustrated, expensively weighty and just, well, smells good... Although the style is plain, Dawkins’s prose feels as if it were cut with a laser.... Dawkins has always been an extraordinarily muscular, persuasive thinker. What feels new here is that he writes with such charm and warmth. Genial Uncle Richard, for me, is the most likeable Dawkins yet." —Sunday Times

"Written with all the clarity and elegance of which Dawkins is a master. It should have a place in every school library – especially in the library of every 'faith' school." —Philip Pullman, on The God Delusion