Seagalogy: A Study of the Ass-Kicking Films of Steven Seagal (Paperback) 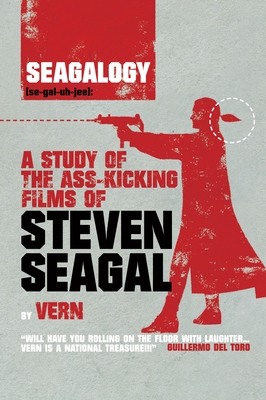 Seagalogy: A Study of the Ass-Kicking Films of Steven Seagal (Paperback)


This book has been declared out of stock indefinitely, so we are unlikely to be able to get it.
Vern, the self-styled ‘outlaw film critic’, is known to millions for his hilarious reviews on the Ain’t It Cool News website, and is described by Hellboy director Guillermo Del Toro as “equal parts Hell’s Angels and Pauline Kael... a national treasure!”

Now, finally, Vern is ready to unleash his magnum opus: an in-depth study of the world's only aikido instructor turned movie star/director/writer/blues guitarist/energy drink inventor — the ass-kicking auteur Steven Seagal. From Above the Law to his Mountain Dew commercials, his entire career is covered in Vern’s inimitable style.

As Vern himself puts it, Seagalogy is “a book that will shake the very foundations of film criticism, break their wrists and then throw them through a window."
As a frequent writer for Ain't It Cool News, Vern has gained notoriety for his unorthodox reviewing style and his expertise in "the films of Badass Cinema." His review of the slasher movie CHAOS earned him a wrestling challenge from its director; his explosive essay on the PG-13 rating of LIVE FREE OR DIE HARD prompted Bruce Willis himself to walk barefoot across the broken glass of movie nerd message boards to respond. Guillermo Del Toro, the director of PAN'S LABYRINTH, called Vern "a national treasure."
“Equal parts Hell’s Angels and Pauline Kael, Vern is a National Treasure!!!" - Guillermo Del Toro, director of Pan’s Labyrinth and Hellboy

“Film criticism genuinely gets no better than this. I would be jealous if I didn’t enjoy reading him so damn much” - ‘Moriarty’, Ain’t It Cool News West Coast Editor

• Advance praise for Seagalogy:
“We can't believe this actually exists, but the world is certainly a better place for it.” - New York Magazine

"There were many points in reading Seagalogy where I was suddenly laughing out loud, which is more than I could say for the smirky-at-best experience of reading SWPL and Douchebags... Vern might begin the book in an ironic Chuck Norris Fact–style context, but as he moves through the Seagal oeuvre, he falls into a weird sort of man-love with his subject. It's a real narrative journey, it's informative, and it's written in a clear voice with a consistent, tongue-in-cheek tone. This is a book that I want to hold onto forever; it makes me laugh, but it also has more value than dozens of other slapped-together humor books churned out by publishers desperate to acquire some tiny, melting slice of cultural currency." thestranger.com

"Seagalogy is a raucous, thigh-slapping and informative read that can murder spare time as easily as Steven Seagal can break peoples’ necks. In short Vern’s Seagalogy is an unexpected gem." --mania.com (Mania Grade: A. Maniac Grade: A+).

"With the obsession of a fan and the authoritative tone of a professor, Vern takes us through every film with attention to plot, themes, dialogue, influences and even politics... This book shouldn't exist in this form, it shouldn't be so wise-crackingly funny, but it does and it is." --denofgeek.com (4 stars out of 5)

"Now I had never heard of the author before breaking this book's arm, throwing its head through a car windshield and calling it a life. But now the duder will stay in my noggin since he has earned my respect via this affectionate, in depth and often side splitting piece of work." --Arrow in the Head (3.5 out of 4)

"Seagalogy not only made me laugh my ass off, but sent me to Amazon to buy some of the early Seagal DVDs I didn’t already own. This book is an instant cult classic." --Bookgasm