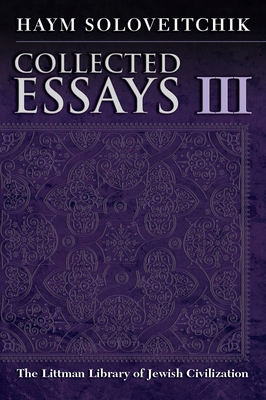 Continuing his contribution to medieval Jewish intellectual history, Haym Soloveitchik focuses here on the radical pietist movement of Hasidei Ashkenaz and its main literary work, Sefer Hasidim, and on the writings and personality of the Proven al commentator Ravad of Posqui res. In both areas Soloveitchik challenges mainstream views to provide a new understanding of medieval Jewish thought. Some of the essays are revised and updated versions of work previously published and some are entirely new, but in all of them Soloveitchik challenges reigning views to provide a new understanding of medieval Jewish thought. The section on Sefer Hasidim brings together over half a century of Soloveitchik's writings on German Pietism, many of which originally appeared in obscure publications, and adds two new essays. The first of these is a methodological study of how to read this challenging work and an exposition of what constitutes a valid historical inference, while the second reviews the validity of the sociological and anthropological inferences presented in contemporary historiography. In discussing Ravad's oeuvre, Soloveitchik questions the widespread notion that Ravad's chief accomplishment was his commentary on Maimonides' Mishneh torah; his Talmud commentary, he claims, was of far greater importance and was his true masterpiece. He also adds a new study that focuses on the acrimony between Ravad, as the low-born genius of Posqui res, and R. Zerahyah ha-Levi of Lunel, who belonged to the Jewish aristocracy of Languedoc, and considers the implications of that relationship.