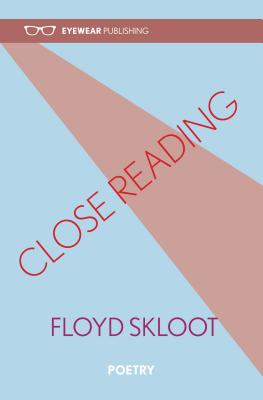 
This book has been declared out of stock indefinitely, so we are unlikely to be able to get it.
Close Reading illuminates moments in life when everything changes or comes into focus. Its poems of love, illness,artistic endeavour, spiritual and emotional awakening embrace taking time and contemplating deeply the flow of sensory experience. This lucid foray into encounters with artists and writers such as Cezanne, Paul Klee, John Donne, Robert Frost, or Floyd Skloot's mentor Thomas Kinsella, as well as family life, vertigo, and resonant personal places is a gentle, kind and inspiring journey.
Floyd Skloot's poetry, memoirs, essays, and ?ction have won three Pushcart Prizes, the PEN USA Literary Award, two Paci?c Northwest Book Awards, and been ?nalists for the Barnes & Noble Discover Award, the PEN Award for the Art of the Essay, and the Paterson Prize in Poetry. In 2010, he was named by Poets & Writers Inc. as "one of ?fty of the most inspiring authors in the world." His work has appeared in The Best American Essays, Best American Science Writing, Best Spiritual Writing, and Best Food Writing. Skloot's most recent books include the poetry collections The Snow's Music and The End of Dreams (both from Louisiana State University Press, 2006 and 2008), and Revertigo: An Off-Kilter Memoir (University of Wisconsin Press, 2014). Skloot is the father of the bestselling writer Rebecca Skloot, author of The Immortal Life of Henrietta Lacks. He lives in Portland, OR, with his wife, Beverly Hallberg. As Poets & Writer magazine said: "Despite virus-induced brain damage, he writes with surprising tenderness"
"A poet of singular skill and subtle intelligence" — The Harvard Review

"A poet of remarkable skills, a keen ear, a fierce eye, an open heart" — Jay Parini

"While poets will long enjoy his superb craft, his gift of language, and the music in his poems' meter, I believe that physicians and clergy could learn much about our humanity in this remarkable work. This is a work that will endure, instruct, and delight for many years to come." — Prairie Schooner.