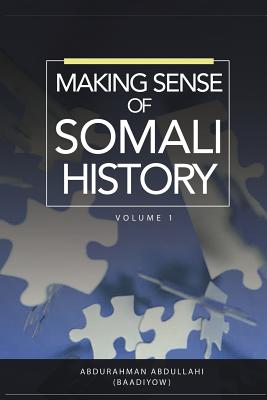 In the last three decades, Somalia has been associated with such horrible terms as 'state collapse', 'civil wars', 'foreign intervention', 'warlordism', 'famine', 'piracy' and 'terrorism'. This depiction was in contradiction to its earlier images as the cradle of the human race, the kernel of ancient civilizations, the land of Punt, a homogeneous nation-state and the first democratic state in Africa. So how did things fall apart in the country?

This Volume 1 of a two-volume narrative, Dr. Abdullahi explores the history of the people of Somali peninsula since ancient times, the advent of Islam and colonialism, the rise and fall of Somali nationalism and the perspectives of the Somali state collapse. The book uses a unique thematic approach and analysis to make sense of Somali history by emphasizing the responsibility of Somali political elites in creating and perpetuating the disastrous conditions in their country.

Dr. Abdurahman Baadiyow combines rare skills of being a high ranking military officer (1971-1986) with being an electronic engineer, Islamic scholar and socio-political activist. He obtained MA and PhD in Modern Islamic History from the Islamic Institute, McGill University, Canada. He is one of the founders of Mogadishu University and the chair of its Board of Trustees. He is a prominent civil society activist and became presidential candidate in the 2012 election in Somalia. Dr. Baadiyow has participated in many academic conferences and published numerous academic papers, book chapters and articles. He is the author of the two highly regarded books: The Islamic Movement in Somalia: A Study of the Islah Movement, 1950-2000(2015), and Recovering the Somali State: The Role of Islam, Islamism, and Transitional Justice (2017). The author can be reached at abdurahmanba@yahoo.com