Joseph: The Life, Times and Places of the Elephant Man (Paperback) 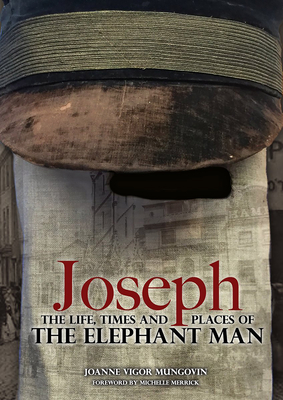 Joseph: The Life, Times and Places of the Elephant Man (Paperback)

The story of Joseph Carey Merrick, more popularly known as the Elephant Man, passed into the realm of legend from the moment he was first exhibited at John Ellis's Bee Hive public house in Nottingham's Beck Street. Much of what has been written about his short life has been distorted and exaggerated, to the point where the most well-known depiction - the 1980 film starring John Hurt - left an indelible imprint of cruelty and suffering at the hands of Joseph's manager, and an eventual rescue by Dr. Frederick Treves of the London Hospital. The truth is rather different. Peeling back the layers of myth, Joanne Vigor-Mungovin has looked into the early life of Merrick and his family in her hometown of Leicester, and here presents, for the first time, detailed information about Joseph's family and his burning ambition to be self-sufficient rather than survive on the charity of others.

Joanne Vigor-Mungovin's interest in Leicester-shire history has seen her spend almost twenty years researching her family tree, in the process discovering that she is related through her maternal line to great grandfathers who were Freemen of the Town of Leicester, and through her paternal line to Tom Norman, the showman who exhibited Joseph Merrick, This led to in-depth research into the Merrick and Potterton families, and life in Leicester at the time Joseph was growing up. For the past three years she has led guided tours around Leicester Cathedral, and has appeared on local East Midlands television, radio and in newspapers supporting the reinternment of King Richard III in Leicester. During the week of Richard III's reburial, she worked as part of the floral team responsible for the displays inside and outside the Cathedral assisting Royal Florist Rosemary Hughes. A registered technician with the General Pharmaceutical Council, Joanne now works as a Verger at the Cathedral Church of St. Martins in Leicester. This is her first book.