Trial of Henry Hunt and Others: The Peterloo Massacre (Hardcover) 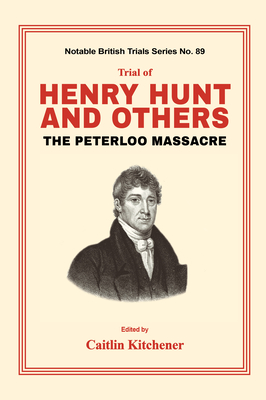 Trial of Henry Hunt and Others: The Peterloo Massacre (Hardcover)

On a fine August day in 1819, several groups of reformers from various Lancastrian industrial towns marched towards St Peter's Field, Manchester, to petition for parliamentary reform and suffrage. It was a colourful display of solidarity, with those gathered proudly holding aloft banners proclaiming their political message. Many in the crowded meeting space eagerly awaited the arrival of the famous political orator, Henry Hunt, who had travelled north to chair this meeting of 60,000 people. As he arrived, the crowd cheered heartily; Hunt bowed to them, and waved his trademark white top hat. After about ten minutes, the Manchester Yeomanry approached the hustings. They had been sent by the on-looking local magistrates to apprehend those who had organised the meeting, as well as those who were expected to speak. Hunt asked the crowd to give the yeomanry three cheers as a friendly gesture - but the crowd's peaceful nature was ignored. The yeomanry arrested all on the hustings, and then charged into the crowd, using their sabres on terrified reformers. These violent actions resulted in a tragedy: eighteen dead and at least seven hundred injured, the first victim being a two year old child, William Fildes. It was not lost on those present that the military had gone from victory at Waterloo to violence at 'Peterloo'. The Peterloo Massacre is an important moment in the democratic and political history of Britain. It has received academic attention that has cemented it into the narrative of the fight for popular suffrage. But until now, although some legal historians have considered it, the trial of those arrested at Peterloo tends not to receive the same coverage: this omission is a kind of secondary injustice against the five men who were convicted of conducting a 'seditious' meeting. Trial of Henry Hunt and Others marks the bicentenary of the trial and enables us to revisit the events of Peterloo through witnesses' testimony, showcasing the tensions that existed between reformers and authorities. It supplements our understanding of Peterloo and serves as a commemoration of reformers' efforts to win the right to vote.

Caitlin Kitchener is an archaeology student at the University of York. Her research explores British political radicalism of the early nineteenth century, focusing on how radical spaces and landscapes were constructed and analysing the emergence of political material culture.