The Little Book of Kobe: In His Own Words-The Wisdom of a King of Sport, Business and Charity (Hardcover) 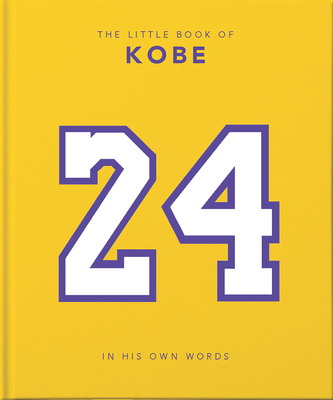 The Little Book of Kobe: In His Own Words-The Wisdom of a King of Sport, Business and Charity (Hardcover)

This is book number 9 in the Little Book Of... series.

The wisdom of a king of sport, business and charity.

Dedicated to a legend of basketball, this is a pocket-sized compendium of the inspirational thoughts of one of the game's all-time greats. From the earliest years of his life through to the heartfelt tributes that poured in after his untimely death, this is a timely portrait of one of sport's most remarkable, accomplished and influential figures.

From his high school years, through his meteoric rise on the court, Bryant always had lots to say. His words on sport, business, charity and life will delight, inspire and amuse the reader. He was almost as famed for his memorable words as for his sporting achievements, so this is a carefully crafted collection of motivational, insightful and amusing quotes from one of the basketball's most respected stars.

My brain... it cannot process failure. It will not process failure. Because if I sit there and have to face myself and tell myself, 'You're a failure'... I think that's almost worse than death. On his winning mentality, as seen on NYPost.com, January 27, 2020

Kobe is the only NBA player in history to have two separate numbers retired by one team, as he wore both No. 8 and No. 24 with the Los Angeles Lakers.